Skip to content
HomeEntertainmentKaranvir Bohra and Teejay Sidhu get trolled for Squid Game themed birthday party for daughters Bella and Vienna; fans ask, ‘Where are we heading?’ 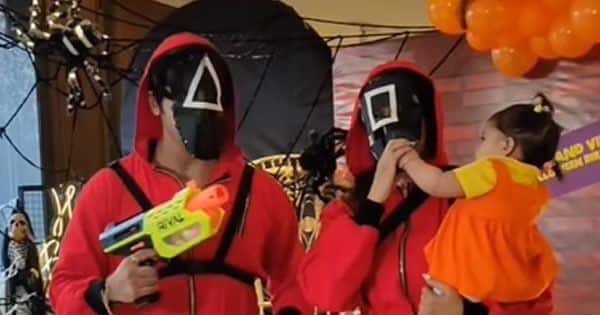 The Korean web series, Squid Game on Netflix has captured the imagination of the world. Hwang Dong-hyuk’s show is about 456 people who play with their lives as one has the chance to become a billionaire. Critics and audience is raving about the show right from its thrill quotient to how it depicts human greed, which can know no bounds. All over the world, people are throwing Squid Game themed parties and making their own version of the games. Videos on Instagram and TikTok have gone viral and how. So, it was not surprising that Karanvir Bohra and Teejay Sidhu decided on a Squid Game themed party for their daughters, Bella and Vienna. Fans are not impressed. One of them wrote, “Don’t think that is a correct theme for kids birthday party,” while another pointed out, “Where are we heading with this …. on kids birthday party…really?”. Another person wrote that just because something is trending one need not jump onto the bandwagon. The comment read, “Just because it’s trending doesn’t make it normal for everyone to be following the trend and definitely not little children.”

The show is the highest rated one on Netflix this year. The main actor, Lee Jung Jae has been voted as the Best K-Drama actor for the year by many Korean entertainment websites. Karanvir Bohra and Teejay Sidhu have three daughters. While the Squid Game theme got criticized, people were gushing over their youngest daughter, Snowflake. People went gaga over her cuteness.