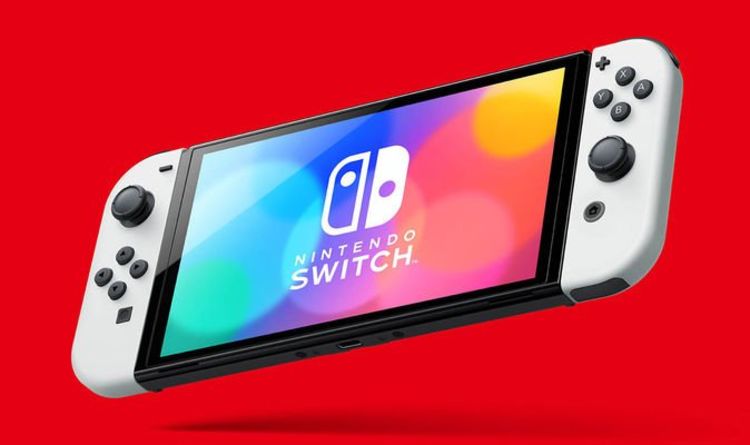 Nintendo are gearing up for the release of the new Switch OLED console. The latest iteration of the hit hybrid console will be arriving on shelves this Friday, with the system priced at £309.99. As the name suggests, the big draw of the Switch OLED is a newly upgraded screen.

As opposed to the regular Switch’s 6.2inch LED screen, the Switch OLED will boast a 7inch OLED screen. The Switch OLED is the first handheld to feature an OLED screen since the PS Vita, and means it offers gamers much crisper visuals with colours that pop off the screen when playing in handheld mode.

If you predominantly game on the go, the Switch OLED looks to be the best way to play Switch games. And if you’re thinking of picking up the snazzy new console from Nintendo there are a number of deals you can turn to.

The Switch console can be purchased on its own for £309.99 from retailers such as Amazon, Argos and the My Nintendo Store.

Or, alternatively, you can choose from a range of bundles available ahead of the console’s Switch OLED release date this Friday (October 8).

Amazon UK has a Switch OLED bundle which includes the console and a copy of Metroid Dread for £359.98.

While GAME has a range of Switch OLED bundles available priced at £349.99.

These bundles include a Switch OLED console and one game, which is either Animal Crossing: New Horizons, Metroid Dread, Mario Kart 8 or Super Mario 3D World + Bowser’s Fury.

If you’re planning on ordering some extra Switch games from GAME then there is one little trick you can employ to save some extra cash.

TopCashback is a website that receives commission for directing its user to thousands of UK retail websites.

And TopCashback then passes on “100 percent” of this commission onto its users.

Cashback earned via the site can be withdrawn from a user’s account either via a BACS transfer, a transfer to a PayPal account or by topping up one of over 20 different gift cards.

And right now TopCashback is running a deal which offers up to 3.7 percent cashback on GAME purchases.

This offer doesn’t apply to Switch OLED consoles, but does apply to physical games.

So if you’re planning on buying any new games to play on your Switch OLED console from GAME then you can make a tidy saving.