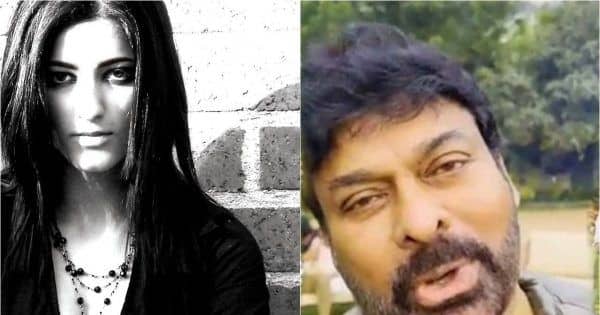 The world of entertainment has been very exciting today and we bring you a wrap of all the trending south news of the day. From Shruti Haasan opening up about getting trolled for loving goth culture to Chiranjeevi recording his family gathering for the celebrations with the traditional Bhogi bonfire, here’s a look at the top trending south news today that you shouldn’t miss. Also Read – Radhe Shyam KITES become the rage among Prabhas fans this Makar Sankranti – view pics

Shruti Haasan feels inspired by the Goth culture having grown up on those stories. The Salaar actress recently opened up on being trolled for loving heavy metal, Goth culture. Shruti is unfazed by the hate.

The trailer of the bilingual ‘Radhe Shyam’ received over 57 million views in 24 hours and even broke ‘Baahubali 2’s four year old record to emerge the ‘most viewed trailer’ of all time.

For Tollywood’s Mega Star Chiranjeevi, this year’s Sankranti festivities are all about bonding with the family and spending quality time together. The extended Chiranjeevi family gathered for the celebrations here on Friday, complete with the traditional ‘Bhogi’ bonfire. The Mega Star conveyed his Sankranti wishes by posting a video that tastefully documents the Sankranti celebrations that had his brothers, sisters, children, nephews, nieces and grandchildren wishing Chiranjeevi as he pans the camera from person to person.

Actor Sibi Sathyaraj urges people to get themselves vaccinated

Actor Sibi Sathyaraj, who is the son of well-known actor Sathyaraj, on Friday urged people to get themselves vaccinated, pointing out that doing so would help keep the intensity of Covid down.

Tollywood actor Ravi Teja’s fans had one more reason to celebrate Sankranti with greater fervour, with the ‘Mass Maharaja’ of the Telugu film industry announcing the launch of ‘Narakasura’, his 70th movie, on Friday. The Sudheer Varma directorial was launched in the presence of Mega Star Chiranjeevi, who did the honours by clapping for the inaugural shot. The film is slated to hit the screens on September 30 this year.