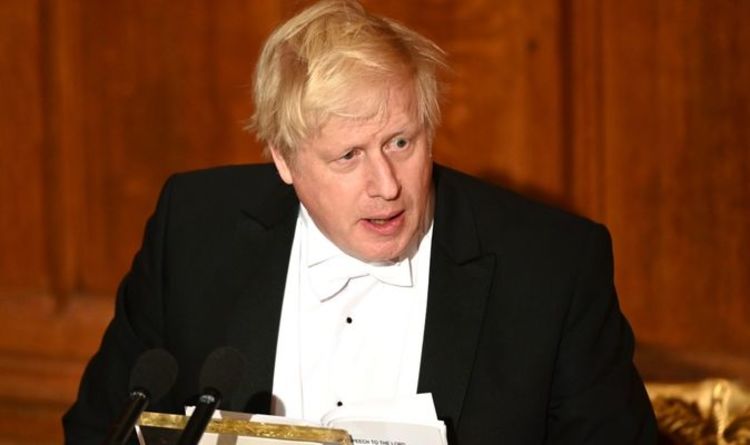 Boris Johnson, 57, issued the warning during his keynote speech at the Lord Mayor’s Banquet in Guildhall yesterday. Speaking to guests, the Prime Minister spoke in detail about the United Nations’ COP26 climate change summit in Glasgow.

However, Mr Johnson also took the time to lay out his thoughts on discussions between Brexit Britain and the Brussels bloc over the Northern Ireland Protocol.

Mr Johnson, who agreed to the Protocol as a part of his Brexit deal, said: “And let me say – given all the speculation – that we would rather find a negotiated solution to the problems created by the Northern Ireland Protocol, and that seems possible.”

But the Prime Minister added Britain could still invoke Article 16 in a bid to protect the integrity of the UK.

Mr Johnson explained: “But if we do invoke Article 16 – which by the way is a perfectly legitimate part of that Protocol – we will do so reasonably and appropriately, because we believe it is the only way to protect the territorial integrity of our country, and meet our obligations to the people of Northern Ireland under the Belfast Agreement.”

The UK’s Brexit minister Lord David Frost, 56, has been in talks with his Czech-born EU counterpart Maros Sefcovic, 55, for the last few weeks.

JUST IN: Ashworth sparks fury as he offers ‘condolences’ to family of Liverpool suicide bomber

Both communities in Ulster have expressed concerns about the impact the Northern Ireland Protocol has had on the province.

According to the Irish Times, the Prime Minister has been told to “back off” on plans to invoke Article 16 by the Border Communities Against Brexit group.

However, the Belfast Telegraph reports the Loyalist Communities Council have urged unionists to “desist from any form of violence”.

The announcement comes just a week after a bus was petrol-bombed in the loyalist area of Newtownards, which is located in the DUP’s leave-voting seat of Strangford.

During the Prime Minister’s speech in London, Mr Johnson joked about why he appeared to be losing his voice.

READ MORE: French claim ‘nothing to learn from’ UK in migrant row

“If I seem a little bit hoarse tonight it is nothing more serious than the well-known epidemiological consequences of sending an 18-month-old child to nursery school,” he quipped.

But the Prime Minister, who campaigned tirelessly for Britain to leave the EU in 2016, also appeared to make an indirect dig at the Brussels bloc over its actions during the pandemic.

After speaking in detail about COP26, Mr Johnson said: “Perhaps we were also helped in Glasgow by a collective sense of embarrassment at the way internationalism failed us during Covid: the squabbles about PPE, the crazy decisions of some countries, naming no names, to try to stop the export of vaccines to others, something we were victims of at the start of this year.”

Earlier this year, it had been reported French President Emmanuel Macron, 43, worked with senior EU officials to divert a batch of AstraZeneca vaccines destined for Britain to France.

DON’T MISS:
EU on brink: Brussels braced for explosive talks with Switzerland [REVEALED]
EU caves! Frost on brink of victory as bloc sees route out of issue [INSIGHT]
Boris Johnson to give press conference today: PM in plea to nation [MUST SEE]

Almost 70 percent of respondents said the Brussels bloc had behaved in a “hostile” way during the dispute and just 13 percent said the EU acted like an “ally and a friend”.

Mr Johnson appeared at the event in Guildhall alongside the new Lord Mayor Alderman Vincent Keaveny, 56.

After Mr Keaveny was elected as the 693rd Lord Mayor of the City of London Corporation in September, the Dubliner said the Square Mile must take advantage of the economic opportunities produced by Brexit.

“We must rise to this challenge once again in the face of changing economic and social trends brought about by the COVID-19 pandemic, while also seizing new opportunities following the UK’s exit from the European Union.”

Keaveny added: “I am confident that the City’s future is bright.

“The UK’s financial and professional services sector will continue to create jobs, drive growth and deliver investment across our country and beyond.”