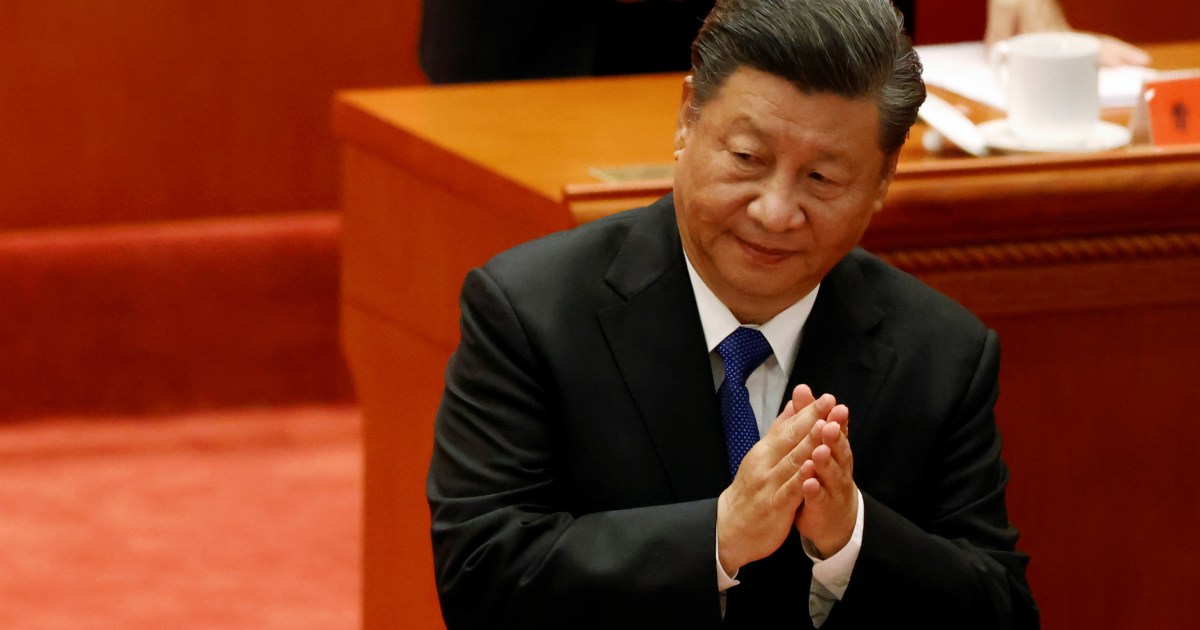 Chinese President Xi Jinping has warned against returning to Cold War-era tensions in the Asia-Pacific region, urging global cooperation ahead of a virtual meeting with his US counterpart.

In a recorded video message to a CEO forum on the sidelines of the Asia-Pacific Economic Cooperation (APEC) summit, Xi said on Wednesday that attempts to draw ideological lines or form small circles on geopolitical grounds were bound to fail.

“The Asia-Pacific region cannot and should not relapse into the confrontation and division of the Cold War era,” he said.

The Chinese president’s remarks were an apparent reference to US efforts with regional allies and partners including the Quad grouping with India, Japan and Australia, to blunt what they see as China’s growing coercive economic and military influence.

Tensions between China and the US have soared in recent years, with Washington raising concerns over Beijing’s actions in the South China Sea as well as its stances on Hong Kong, Xinjiang and Taiwan. Amid the frictions, the two sides began talks to improve communications and in October, officials announced that Xi and US President Joe Biden will hold a virtual meeting before the year’s end.

Officials have not said when the summit will take place, but the Reuters news agency, citing an unidentified source said Xi and Biden could hold the talks as early as Monday.

In his speech on Wednesday, Xi also outlined what he thought were the most pressing tasks for the Asia Pacific region –  emerging from the shadow of the COVID-19 pandemic and achieving steady economic recovery.

Countries must also do more to close the coronavirus immunisation gap, he said.

“We should translate the consensus that vaccines are a global public good into concrete actions to ensure their fair and equitable distribution,” Xi said.

The week-long APEC forum, culminating in a meeting of leaders from all 21 members, is being conducted entirely online by hosts New Zealand.

In all, APEC members account for nearly 3 billion people and about 60 percent of the world’s GDP. But deep tensions run through the group of 21 nations and territories that include the US, China, Taiwan, Russia, and Australia.

Among them is Taiwan’s bid to join a regional trade pact, the Comprehensive and Progressive Agreement for Trans-Pacific Partnership (CPTPP).

China, which has also applied to join CPTPP, opposes Taiwan’s membership because it claims sovereignty over the self-ruled island. Beijing has increased military activities near the territory over the past year, something that has raised concern in Washington and in some European capitals.

It also remains unclear whether all APEC members will support a bid by the US to host the 2023 round of APEC meetings.

Still, officials say they have made significant progress during some 340 preliminary meetings leading up to this week’s leaders’ meeting.

APEC members have agreed to reduce or eliminate many tariffs and border holdups on vaccines, masks and other medical products important to fighting the pandemic.

Climate change has also been a key item on the agenda at the summit, which is taking place in parallel with the United Nations’ COP26 meeting in Glasgow.

At that meeting, the US and China on Wednesday announced a deal to boost cooperation on climate change, including by reducing methane emissions, protecting forests and phasing out coal.

The climate agreement “shows that the United States and China can cooperate on issues that transcend other conflicts”, Frans Timmermans, the European Commission’s executive vice president for the European Green Deal, told Al Jazeera.