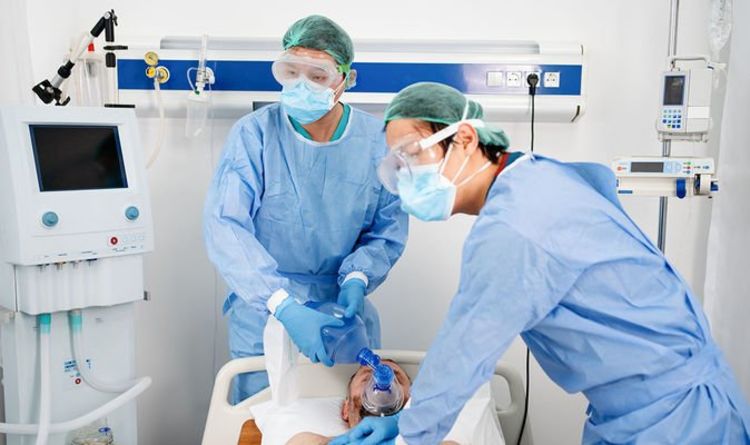 Around one in 50 people in private households in England had coronavirus in the week to October 30, according to the latest estimates from the Office for National Statistics (ONS).

One in 50 is the equivalent of about 1.1 million people.

It is the same proportion of people who were estimated to have Covid at the peak of the second wave in early January.

The ONS figures come a day after a study claimed the overall rates of coronavirus in England are higher than they have ever been.

Researchers suggest the increase is being driven by infection in children aged five to 12, and those aged 13 to 17.

The prevalence observed among the younger age group was 5.85 percent, while in the older bracket it was 5.75 percent.

Commenting on the study, Dr Jenny Harries, chief executive of the UK Health Security Agency, said: “Although the number of hospitalisations and deaths remain lower than in previous peaks, these findings are a powerful reminder that the pandemic is far from over and remains a serious threat to health and wellbeing.

“This new data strongly reinforces the need for all eligible age groups to get vaccinated and to take mitigating measures such as wearing a face covering in crowded places and ensuring good ventilation indoors.

“This is particularly urgent for older people whose immunity may be waning given that several months have passed since they received their jabs. I strongly encourage everyone who is eligible for a third dose or a booster shot to come forward without delay.”

Health Secretary Sajid Javid added: “Today’s report sends an important message that we need to stay vigilant as we head into the winter months.

“Vaccines continue to be our first line of defence against this disease and it is crucial we all get jabbed to keep the virus at bay.”

It comes as the first anti-viral pill for coronavirus that can be taken at home has been approved for use in the UK.

Molnupiravir is for people who have had a positive Covid test and have at least one risk factor for developing severe illness, such as obesity, being over the age of 60, diabetes or heart disease.

The UK’s Medicines and Healthcare products Regulatory Agency (MHRA) said the drug is safe and effective at reducing the risk of hospital admission and death in people with mild to moderate Covid who are at extra risk from the virus.