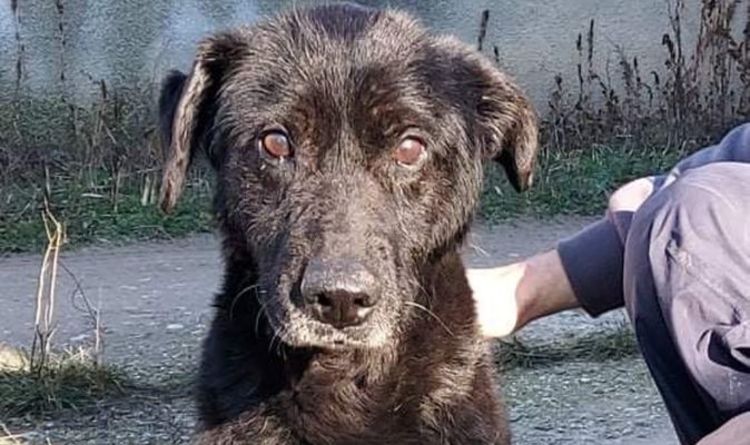 Ten-year-old Jet was skinny and cold when he was found wandering the streets of Brasov in Romania in October. He was taken in by rescuer Roxana Tudose, who is supported by the UK charity EverMore Dog Rescue.

Jet, a small black labrador described as very friendly, is due to travel to Britain later this month.

However, he has not yet had any interest from potential adopters despite attempts to promote him.

It is thought his previous owners in Romania cast him out due to his age.

“Due to also being blind, he was at high risk of being hit by a car or succumbing to the harsh winter, currently -12C degrees at night, so Roxana needed to take him despite being completely full at the shelter.

“It’s likely that Jet was an owned dog as he’s very gentle and friendly towards people and other dogs.

“It’s not uncommon [in Romania] when a dog becomes elderly or has any veterinary requirements that they are abandoned and no longer wanted.

READ MORE: Sick dog fighting for his life after being dumped by side of road

The charity also supports spay and neuter campaigns in Romania.

All dogs brought to the UK have a pet passport, microchip, vaccinations, worming and flea treatment.