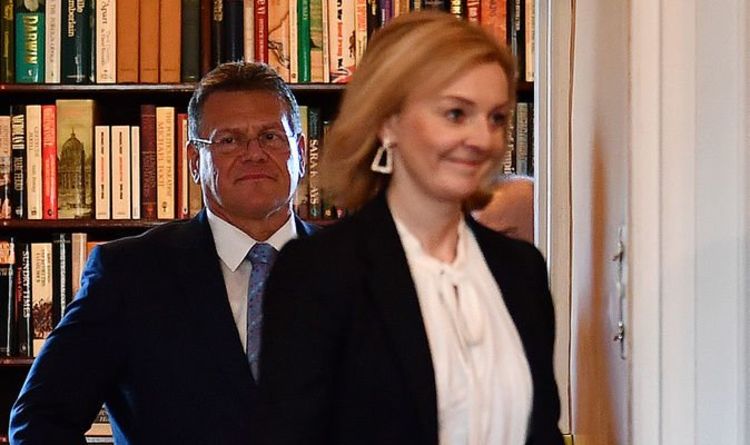 The Foreign Secretary invited her Brussels counterpart for two days of talks at her country home of Chevening as she sought to find a breakthrough in negotiations on the Northern Ireland Protocol.

Ms Truss wined and dined the eurocrat as she attempted to woo him in talks with the pair feasting on Scottish smoked salmon, Welsh lamb and Kent apple pie as they got to know each other.

She also took him on a walk of the grounds of the 17th Century mention in Kent in a bid to build up a personal rapport during what was their first face-to-face meeting.

The strategy is in stark contrast to Lord Frost, who took a far more icy approach with the EU to keep his cards close to his chest and Brussels unsure of the UK’s next move.

While his tactics yielded results in withdrawal negotiations and trade talks, he failed to make headway on the Northern Ireland Protocol before his departure from Government.

“A chance to discuss the implementation of the IE/NI Protocol, in particular.”

The pair also released a joint statement after the meeting, a rare occurrence when Lord Frost was in charge.

It said the talks were held in a “cordial atmosphere” and both sides were committed to finding a solution.

“The meeting took place in a cordial atmosphere.

“We share a desire for a positive relationship between the EU and the UK underpinned by our shared belief in freedom and democracy.”