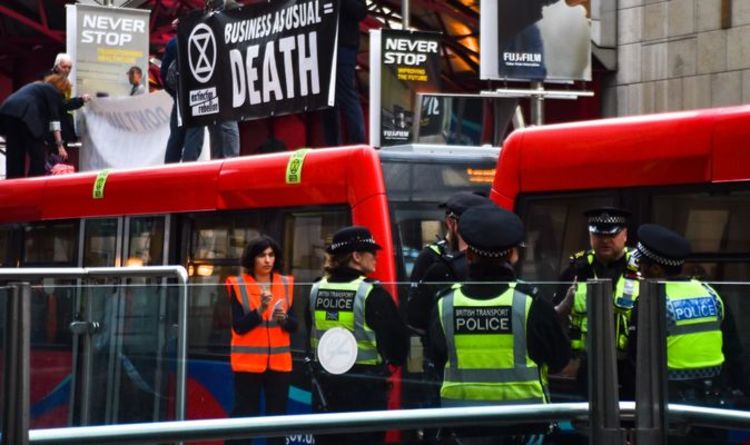 Reverend Sue Parfitt and Father Martin Newell caused up to 77 minutes of disruption after they climbed on the roof of a rush-hour train at east London’s Shadwell station in October 2019. Philip Kingston was also part of the protest and glued himself to the train.

Now, a jury has cleared the three Extinction Rebellion activists by a jury at Inner London Crown Court on Friday.

The three protesters – members of Christian Climate Action – were facing charges of obstructing an engine or carriage on the railway, which they denied.

On Wednesday, Mr Newell told a jury his “deepest motivation” was his Christian faith.

He told the court: “There’s a climate emergency which is an existential threat to the human race and… this was the best way I could think of at that time to draw attention to it and get the government to take the urgent action that’s needed.

Jurors heard Ms Parfitt and Mr Newel said prayers while they were on the roof for about 45 minutes.

They reportedly tried to talk to passengers and then continued their protest in silence, the court was told.

The protest sparked 77 minutes of disruption with 15 DLR trains delayed or cancelled.

Southwark Crown Court heard each of the defendants deliberately sprayed graffiti or smashed windows at the Shell building in Belvedere Road, central London.

The jury of seven women and five men cleared the defendants of all charges after just seven hours of deliberations.

The six, who represented themselves, were also cleared of individual counts of having an article with intent to destroy or damage property.

They said they targeted the Shell building because the company was directly contributing to climate change, “thereby causing serious injury and death”.

The protesters argued their actions were “necessary” and “proportionate” response to the harm being caused.

Extinction Rebellion is a global environmental movement with the stated aim of using nonviolent civil disobedience to compel government action to avoid tipping points in the climate system, biodiversity loss, and the risk of social and ecological collapse.