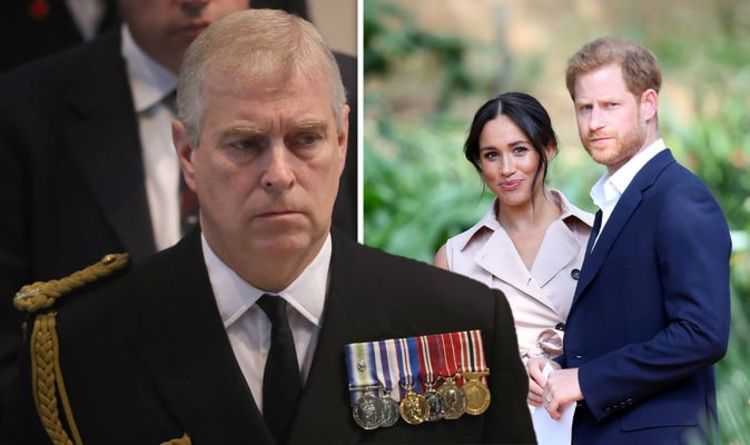 Prince Andrew, the Duke of York, will no longer use the style of His Royal Highness (HRH). The news came shortly after a US judge ruled Virginia Giuffre can proceed with her civil case against the Prince. Ms Giuffre has brought a case of battery and intentional infliction of emotional distress against Prince Andrew. The Duke has strongly denied all allegations.

On Thursday, it was announced that Prince Andrew has returned his military roles and royal patronages to the Queen.

A statement from Buckingham Palace read: “With the Queen’s approval and agreement, the Duke of York’s military affiliations and royal patronages have been returned to the Queen.

Prince Andrew will also no longer be styled with the honorific of His Royal Highness (HRH).

For this reason, Prince Andrew was born HRH in 1960 like the rest of his siblings Prince Charles, Princess Anne and Prince Edward.

As granddaughters of the monarch through the monarch’s son, Andrew’s daughters Princess Beatrice and Princess Eugenie are also HRH.

Here is a full list of Royal Family members who lost or stopped using their HRH titles in recent decades.

Following the Sussexes’ decision to step down from their senior working royal roles, it was announced they would no longer use their HRH titles.

“The Duke and Duchess of Sussex will no longer actively use their HRH titles as they will no longer be working members of the family as of Spring 2020.”

Meghan and Harry are still known as the Duke and Duchess of Sussex, and Harry has kept his title as a Prince.

The breakdown of Prince Charles and Princess Diana’s marriage was famously documented in the early 1990s.

In 1996, Charles and Diana divorced. Diana was permitted to keep her apartment at Kensington Palace and was said to have been awarded a multi-million-pound settlement.

However, Diana lost her HRH status in the proceedings and was subsequently allowed to be titled as Diana, Princess of Wales.

The Queen issued a letters patent in 1996 outlining that divorced royal wives would no longer carry the style of HRH.

Sarah and Andrew had married in 1986, separated in 1992 and divorced four years later.

Sarah lost her HRH style due to the letters patent issued by the Queen, and she is now titled Sarah, Duchess of York.