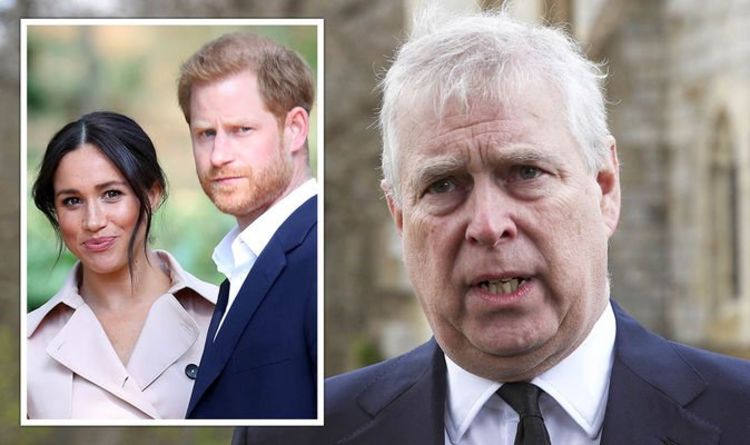 One day after it emerged Prince Andrew faces trial following a New York judge’s refusal to throw out a civil case launched against him by Virginia Giuffre, the Queen removed the Duke of York’s royal patronages and honorary military titles. A royal source also said the Duke won’t use his His Royal Highness style in any official capacity.

A constitutional expert claimed parallels “can be drawn” between the Duke and Duchess of Sussex, who also returned to the Queen Harry‘s three honorary military titles and the couple’s royal patronages one year after they had officially stepped down as full-time working royals.

However, the Sussexes’ case is “hardly comparable” with Andrew’s, the academic argued.

“Although parallels can be drawn with the recent outcome of the Sussex withdrawal both cases are hardly comparable.”

Mr MacMarthanne claimed that, unlike Harry and Meghan who stepped away from royal duties voluntarily, Andrew’s situation left him with little choice.

He added: “The latter involves a couple who voluntarily withdrew from frontline royal service, the former a prince obliged to.”

“That said it seems a clear message has been sent, and in doing so a new precedent established whereby if for whatever reason, you withdraw from frontline royal duties you can expect to surrender all royal patronages, military appointments and public usage of the HRH prefix.”

Prince Andrew announced in November 2019, a few days after his now-notorious interview with Newsnight’s Emily Maitlis focused on his association with late convicted sex offender Jeffrey Epstein, he would temporarily step back from public duties.

Buckingham Palace did not say this move had been imposed on the Duke of York and, speaking about his decision, Andrew said in a statement he had “asked” the Queen for the permission to step back from his public role for the time being.

He also said: “It has become clear to me over the last few days that the circumstances relating to my former association with Jeffrey Epstein has become a major disruption to my family’s work and the valuable work going on in the many organisations and charities that I am proud to support.”

At the same time, many organisations associated with the Duke announced their decision to sever their ties with Andrew.

While being far from the public eye, the Duke retained many of his royal and private patronages and honorary military titles awarded to him by the Queen over the years.

This changed on Thursday evening, after the Duke was spotted arriving at Windsor Castle by car, when Buckingham Palace issued a brief statement focused on Andrew’s public role and titles.

It read: “With The Queen’s approval and agreement, The Duke of York’s military affiliations and Royal patronages have been returned to The Queen.

Andrew is being sued by Ms Giuffre, formerly known as Virginia Roberts, who claims he “committed sexual assault and battery” upon her when she was a teenager.

She alleges she was trafficked by Epstein, who was found dead in his prison cell in August 2019, to have sex with the Duke when she was 17.

The Duke has firmly and repeatedly denied the allegations against him.

During his Newsnight interview, he stated he has no recollection of meeting Ms Giuffre.

Meghan and Prince Harry also gave up their honorary military titles and royal patronages and are no longer to use their HRH styles.

This decision was announced in early 2021, after the Duke and Duchess of Sussex told the Queen they didn’t intend to return to their roles of senior royals, which they had renounced at the end of March 2020.

After stepping down as full-time working members of the Firm and no longer receiving funds from the Sovereign Grant, Meghan and Harry gained the freedom to pursue financially profitable deals as private citizens.

They were also allowed to relocate abroad – and in the spring of 2020, they moved to California with their son Archie Harrison.

In the same year, they established their new organisation, Archewell, which encompasses a non-profit foundation and two production companies, Archewell Audio and Archewell Productions.