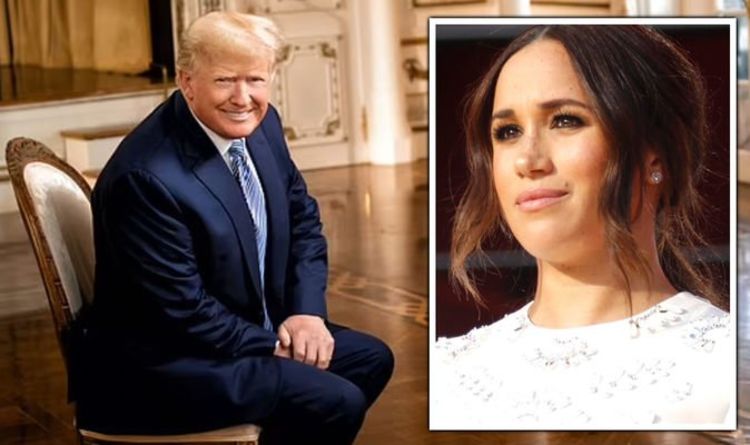 In an interview with Nigel Farage to be aired this evening, the former US President said he is “not a fan” of the Duchess of Sussex. He claimed she had caused the breakdown of the Duke of Sussex’s relationship with the rest of his family.

According to the Mail, Mr Trump will tell viewers of GB News tonight: “I’m not a fan of hers. I wasn’t from day one.

“I think it’s ruined his relationship with his family, and it hurts the Queen.”

The Duchess of Sussex had been “very disrespectful to the Queen,” he claimed, “who’s such a great woman, such a great person – a historic person.”

READ MORE: Donald Trump’s attacks on Meghan ‘unlikely to be of concern to Palace’

Mr Trump is said to express his fondness for the Queen in the interview, saying that he was raised to have respect for her by his Scottish mother.

His remarks would not be the first time he has rebuked the Duke and Duchess.

Following rumours that the Duchess may be considering a presidential bid herself, Mr Trump told Fox News: “I hope that happens because if that happened then I think I’d have an even stronger feeling towards running.”

He has said previously that he was “very seriously” considering running for the presidency again in 2024.

Mr Trump and Mr Farage have kindled a friendship for several years now.

Mr Farage appeared at an election rally for Mr Trump last October in Phoenix, Arizona, where the then-president hailed him as the “king of Europe”.

Mr Farage was the first UK politician to meet Mr Trump after he was elected to the presidency in 2016.

The interview, recorded on Monday in Florida, is also anticipated to touch on Mr Trump’s views on his defeat to Joe Biden in November last year, the subsequent Capitol Hill riots, Black Lives Matter and the UK-US special relationship.

He is also expected to direct his criticism towards Boris Johnson for his green agenda.