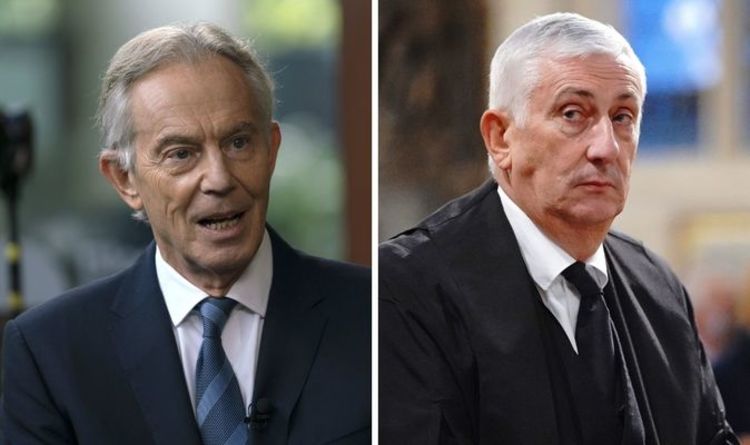 The Prime Minister will face questions from the Commons today from midday. There is reportedly backbench fury among Conservative MPs, after a video leaked of Mr Johnson’s former Press Secretary Allegra Stratton joking last December about reports of a Christmas party held at Number 10 during lockdown. Mr Johnson is expected to face several tough questions from Labour leader Sir Keir Starmer today, after a number of claims a party took place on December 18 with dozens of people in attendance.

Downing Street has continued to insist that no party was ever held.

Speaker of the House of Commons Sir Lindsay will be tasked with keeping what is likely to be a tense and irate Prime Minister’s Questions in order.

However, during a long political career Mr Hoyle has himself been caught in conflict with colleagues, and even issued tempered words towards former Prime Minister Mr Blair over Gibraltar in 2002.

According to Peter Hain, who was Europe minister at the time, Mr Blair signed a deal with the Spanish government to end the UK’s 300-year control of Gibraltar and move towards a joint-sovereignty with Spain.

The deal, which was swiftly vetoed by the government in Madrid, would have reportedly seen the UK keep control of a naval base on the island, but the people of Gibraltar would be allowed to hold a referendum.

Mr Hoyle, who was a Labour backbencher at the time, fought vehemently for the right of Gibraltar to stay British after three of his constituents were held at the border between Gibraltar and Spain while on holiday.

It is thought that his clash with Mr Blair over the rock may have precluded him from a frontbench role in the Prime Minister’s Labour government.

In his 2017 memoir Mr Hain accused Mr Blair of being “contemptuous” towards the people of Gibraltar’s desire to remain part of the UK.

He claimed that the then-Prime Minister originally sanctioned the deal because he wanted the support of Spain during EU negotiations.

Mr Hain also claimed that even after Spain vetoed the deal, Mr Blair and former Foreign Secretary Jack Straw were convinced Gibraltar should be run by both the UK and Spain.

In January 2002, when reports of the deal first leaked, a furious Mr Hoyle told CNN: “I think there’s quite a lot of truth in it.

“A referendum should be given to the people of Gibraltar and I would expect that whatever the result was would be the way forward and that that result should be respected.”

In November that year, a referendum was held in Gibraltar which found that 98 percent of Gibraltians wanted to remain under the British flag.

Since 2006, the rock has governed most of its affairs, though defence and foreign relations are the UK’s responsibility.

In 2017 after Mr Hain’s book revealed Mr Blair’s alleged attempts to offload Gibraltar, the rock’s Chief Minister was scathing of the former Prime Minister and his Government.

Speaking to Sky News, Fabian Picardo said Gibraltarians will always be “sceptical” of Mr Blair after the revelation.