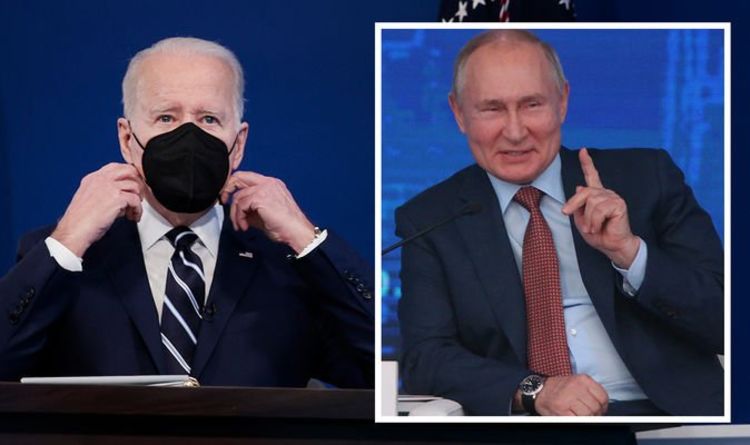 The Senate on Thursday failed to pass a bill to slap sanctions on Russia’s Nord Stream 2 natural gas pipeline sponsored by Republican Senator Ted Cruz. Nord Stream 2 will transit gas from Russia into Germany via the Baltic Sea, bypassing Poland and Ukraine on its way. But the pipeline has been hit with delays and had its certification suspended by German regulators. Critics say that Mr Putin has deliberately withheld gas deliveries from Europe to speed up the certification process.

The EU’s anti-trust chief, Margrethe Vestager, said this week that supply was not ramped up supply to meet demand.

She reportedly quizzed Gazprom, Russia’s state-owned gas giant, on the EU’s high energy prices that are likely to have been caused by its gas squeeze.

Ms Vestager said at a news conference: “It is thought-provoking that a company in view of increasing demand limits supply.

“That is quite rare behaviour in the marketplace.

“We have sent out questionnaires to a number of energy suppliers in this field.

“We have got a lot of responses but we are still waiting for others including Gazprom. We are eagerly awaiting the information from them in order to advance our analysis.”

But despite these comments, Mr Biden appears to have taken a softer line on Nord Stream 2 than his predecessor Donald Trump.

That is because he waived sanctions slapped down on the pipeline back in May.

But no sanctions on Nord Stream 2 appear to be in question.

This is despite Washington previously opposing the pipeline and having even called for it to be scrapped entirely if Russia invades Ukraine.

Jake Sullivan, Mr Biden’s Security Advisor, said this is why the West could use Nord Stream 2 as “leverage” over Russia.

He said in a press conference: “It is leverage for the West because if Vladimir Putin wants to see gas flowing through that pipeline, he might not want to take the risk of invading Ukraine.”

Meanwhile, energy prices are skyrocketing in the EU.

The head of the International Energy Agency (IEA) Fatih Birol on Wednesday said Russia was contributing to an undersupply of natural gas to Europe.

He recognised that this was happening while Russia and the West were locking horns over Ukraine.

Mr Birol said: “We estimate that Russia could increase deliveries to Europe by at least one-third, or over 3 billion cubic metres per month.

“This equates to almost 10 percent of the EU Union’s average monthly gas consumption – and would be the equivalent of a new LNG tanker delivering a full cargo of natural gas to Europe every day.

“Together with the current high level of LNG inflow, this would provide significant relief to European gas markets”

And the EU is still being deprived of Russian gas.

The Yamal-Europe pipeline diverted gas flow to the East on December 21, and this has been in effect ever since.

But the Kremlin claims that Nord Stream 2 will solve Europe’s crisis.

Dmitry Peskov, Kremlin Peskov, told reporters: “Undoubtedly, the quickest launch of Nord Stream 2 would significantly balance out the pricing parameters of natural gas in Europe, including on the spot market.

“That’s obvious. The demand is high.”