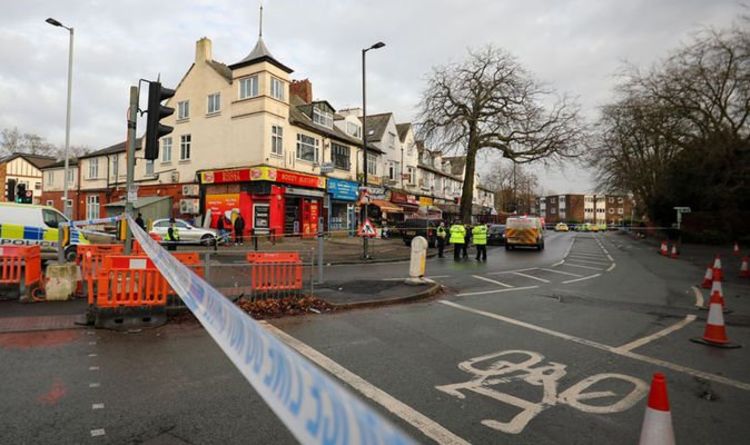 Forensics officers are also on location after the incident, which happened inUpper Chorlton Road this morning, involving a stabbing at a ‘business premises’ just after 10am. The man was taken to hospital with what police described as “potentially life-threatening injuries”. He remains in a critical condition.

A cordon remains in place at the scene, which is barely two miles from Old Trafford, Manchester United’s ground.

“He’s been taken to hospital where he remains in a critical condition.

“No arrests have been made, an investigation is underway, and patrols will be stepped up in the area as officers carry out their enquiries.

Alternatively they can contact the independent charity Crimestoppers, anonymously, on 0800 555 111.

Greater Manchester Police joined other forces from across the UK last year in support of Operation Sceptre, a twice-yearly initiative aimed at reducing knife crime.

GMP’s knife crime lead, Superintendent Chris Downey, said: “Knife crime remains a priority and together with our partners in the Greater Manchester Violence Reduction Unit (VRU) we are working hard to make a difference in our communities.

“The Operation Sceptre weeks of action are not the only time of the year we dedicate to tackling knife crime.

“We are working hard each and every day to disrupt and deter violent crime across Greater Manchester with the ultimate aim of keeping people safe.

Mr Downey added: “As well as deploying officers to knife crime hot-spots, it is important we understand and tackle the root cause of violent crime so that we can provide long-term solutions and prevent the same problem from reoccurring.

“We will arrest and bring people to justice where required, but it’s equally as important for us to work with partners to get people the help they need to stop them from becoming involved in violent crime in the first place.

“The police can’t tackle knife crime alone; we need the continued support from our communities.”

He concluded: “I am asking the public of Greater Manchester to pull together and take action.

“We need your help to share our message and encourage you to talk openly with family members and friends to ensure that we prevent anyone from carrying or using a knife.”