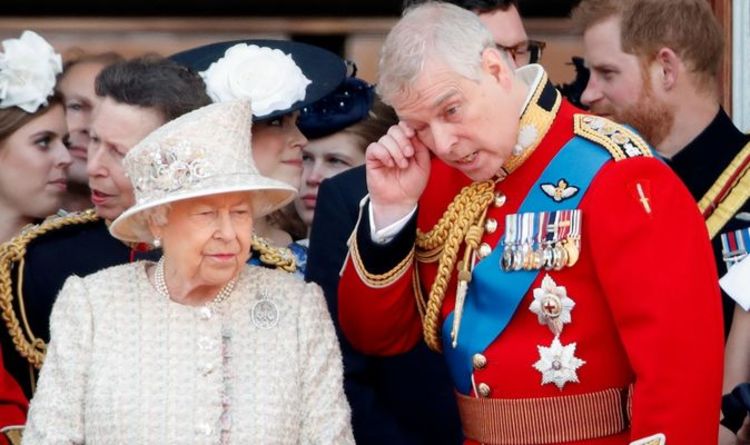 Prince Andrew had 12 miliary titles removed and is no longer able to use the honorific His Royal Highness in an official capacity. It is believed that the Monarch worded the statement herself which was issued by Buckingham Palace at 5pm on Thursday.

Her Majesty, Prince Charles and Andrew reportedly came to a mutual agreement over the decision, though it would have ultimately needed the Queen’s approval.

Sources told The Sun that the Queen was “determined not to allow any emotional sentiment” to enter in it.

It comes as calls have been made for the Duke of York to lose the title linking him to the Yorkshire city with a “unique connection to the crown and the monarch”.

A senior member of City of York Council has launched a campaign to strip Andrew of his Duke of York title.

Darryl Smalley, Liberal Democrat executive member for culture, leisure and communities at the local authority, said: “York’s unique connection to the crown and the monarch is an important part of our city’s legacy, history and a great source of pride.

“No-one is above the law and all allegations should rightly be fully investigated, particularly following the recent distressing court cases.

“We stand with all victims, whose harrowing stories have shocked us all in recent months.

“Whilst Prince Andrew remains innocent until proven guilty, Buckingham Palace and the Government must consider the implications of these troubling allegations moving forward.

Ms Giuffre wrote on Twitter that she felt pleased with the ruling.

She said: “I’m glad I will have the chance to continue to expose the truth & I am deeply grateful to my extraordinary legal team”.

Buckingham Palace’s statement said: “With the Queen’s approval and agreement, The Duke of York’s military affiliations and Royal patronages have been returned to The Queen.

Andrew stepped down from Royal duties in November 2019 after an interview with Emily Maitlis on Newsnight.

He released a statement saying he had asked to step back.

In it he wrote: “It has become clear to me over the last few days that the circumstances relating to my former association with Jeffrey Epstein has become a major disruption to my family’s work and the valuable work going on in the many organisations and charities that I am proud to support.

“Therefore, I have asked Her Majesty if I may step back from public duties for the foreseeable future, and she has given her permission.

“I continue to unequivocally regret my ill-judged association with Jeffrey Epstein.

“His suicide has left many unanswered questions, particularly for his victims, and I deeply sympathise with everyone who has been affected and wants some form of closure. I can only hope that, in time, they will be able to rebuild their lives.”