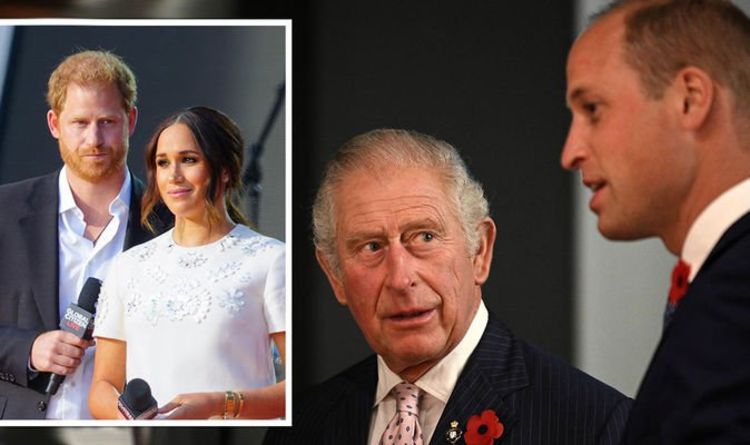 Royal author Angela Levin discussed the tight-knit collaboration witnessed recently between senior members of the Royal Family. Taking to Twitter as the second day at COP26 was ending, the expert said: “What we are seeing at the moment now H[arry] and M[eghan] are out of the picture frame is some fine tuning to ensure the Royal Family stay supportive of each other.

“It’s keep calm and carry on that helps it survive.”

The remark by Ms Levin, author of Harry: Conversations with the Prince, was welcomed by many of her followers.

One, named Eliza, said to expect a synergy between Prince William and Prince Charles’s work and duties in the future.

She wrote on Twitter: “I believe we will see a very close working relationship between Charles & Wills in the future.

“I think Charles reign will be almost like a co-reign where Wills is just as involved in important matters & events.

“Great concept for popularity of monarchy & assuring a solid future.”

“It will not be easy for anyone to come after a long-lived popular Monarch.”

Commenting on Ms Levin’s tweet, another royal watcher with the nickname ohmydays said: “It’s so lovely how The Queen is supported by the loyal and trustworthy members of her family.

“Loved her speech saying how proud she was of them.”

Another, Elaine Ross, added: “They carry out their duties with minimum fuss and great dignity.”

Senior royals provided a show of unity this week, as they met world leaders, business tycoons and innovators at COP26.

The Prince of Wales, given his lifelong work to tackle climate change and promote sustainability, was a prominent figure at the opening ceremony of the climate change summit, where he issued a call to action to decision-makers.

But he also worked together with his wife Camilla, Duchess of Cornwall, Prince William and Kate, Duchess of Cambridge, to sway and charm politicians and business entrepreneurs at the evening reception taking place on Monday.

There, the royals spoke to various world leaders – including Canada’s Prime Minister Justin Trudeau and US President Joe Biden.

And they gathered to respectfully listen to the powerful video message recorded by the Queen in lieu of her absence at the summit.

The royal father and son also attended together a reception at the Clydeside Distillery, during which they brought together the 15 finalists of the Earthshot Prize organised by Prince William and some of the business leaders who joined Charles’s sustainability pledge with its Sustainability Markets Initiative.

A royal watcher and US PR expert, known on Twitter with the nickname Royal Tea, noted the collaborative work done by the two future Kings.

She tweeted: “Father brings the big corporate entities, son brings the grassroots innovators they should be funding.

“An incredible example of synergies between Royal projects and showcase of how everyone and every angle is needed to fight climate change.”

While Prince Charles and Prince William were directly involved in COP26, Meghan and Prince Harry also made their voices heard as they pledged to bring their organisation Archewell to net zero by 2030.

The Duke and Duchess of Sussex have shown a keen interest in the environment over the years.

Prince Harry has followed in his grandfather’s footsteps with his interest in conservation as patron of African Parks.

And has also supported the creation of a more sustainable tourist industry by leading the Travalyst initiative.