In 1947, a goat wandered into a cave in the desert cliffs near the northwestern shores of the Dead Sea. The shepherd who had been caring for the flock saw the goat enter the cave and hurled a rock inside hoping to flush it out. That historic stone shattered a clay jar, which had held three of the Dead Sea Scrolls for 2,000 years.

What followed were excited excavations in the caves where the scrolls were found, and at Qumran, an ancient settlement below the cliffs. By the late 1950s archeologists working at Qumran had uncovered remains from buildings, a tower, cisterns, Jewish ritual baths, and an aqueduct.

Yet while fascinating in themselves, ruins from Qumran are not the real heart of the site — not, at least, according to Dr. Daniel Vainstub of Ben-Gurion University.

Vainstub claims that the most historically significant portion of Qumran is a smooth area of land adjacent to the ruins on which not a single artifact was discovered. It was on this plot, asserts Vainstub, that thousands of members of an ascetic Jewish sect we know as the Essenes (but who called themselves Yahad in their writings) gathered each year for a frightening religious ritual.

Vainstub, who has been studying Essene writings for over 30 years and is an expert on ancient languages, bases his theory on a new interpretation of a scroll called the Damascus Document. He claims that his findings solve questions that other theories have generally left up in the air: Why were there no bedrooms discovered at Qumran, what purpose did the naturally flat, empty area serve, and what was the purpose of the long, low wall that runs alongside it?

Like the two other main Jewish sects of the time, the Pharisees and the Sadducees, the Essenes were scattered all over the country, residing mainly in communities made up of men only, and others consisting of families with children. The sect’s central headquarters was at Qumran, by the Dead Sea.

Most experts believe that several hundred men lived at Qumran, which today is a national park. Vainstub thinks otherwise and asserts that only a few dozen men made their homes at Qumran, tasked with maintaining the site. With so few permanent settlers, apparently there was no necessity for bedrooms; possibly, the men slept in caves. 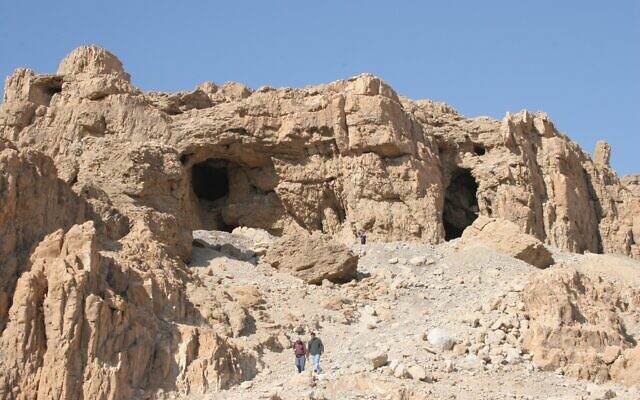 The famous caves in Qumran, in which the Dead Sea Scrolls were discovered in 1947. (Shmuel Bar-Am)

In addition to upkeep, he adds, the Essenes were also meant to prepare Qumran for the yearly gathering of thousands of members who, although they had been circumcised after birth and thus had already entered into a covenant with God, felt the need to renew that bond every single year.

During the rituals, at least 2,000 members of the sect would stand in rows where they would be alternately cursed by Levites and blessed by the Cohanim, or the priestly class. After each curse or blessing, the men would respond “amen.” Vainstub notes that according to Essene belief, the angels held a parallel ceremony up in heaven, watching everything said and done and judging the men below. So scary is this thought that many Essenes refused to take part and were expelled from the sect. 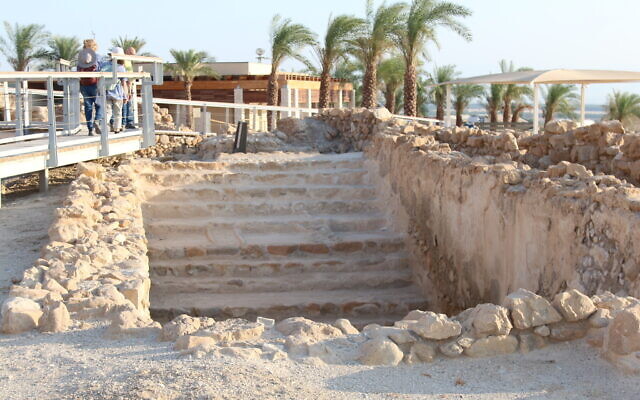 An enormous ritual bath at Qumran National Park was used for ritual purification by an ascetic Jewish sect roughly 2,000 years ago. (Shmuel Bar-Am)

We toured Qumran National Park with Vainstub a few weeks ago, where he explained that the northernmost section of the site was constructed during the beginning of Hasmonean — also colloquially known as Maccabi — rule in Judea between the years 140 and 37 BCE.

The second part was built immediately to its south at around 37 BCE, when the Romans put Herod the Great in charge of the region. Among the additions were a large kitchen for feeding the men who showed up for the annual meetings, a huge ritual bath in which the men could purify themselves before the ceremony, and an enormous cistern to provide everyone with water.

The ceremonies were probably held in early summer over the Shavuot holiday, so, according to Vainstub, the Essenes would have slept under the stars. Meals would have been prepared in the kitchen, which until today still features a window for handing food out to the crowds. Next to the kitchen was constructed a floor consisting of thousands of small stones stuck to the ground and to each other. 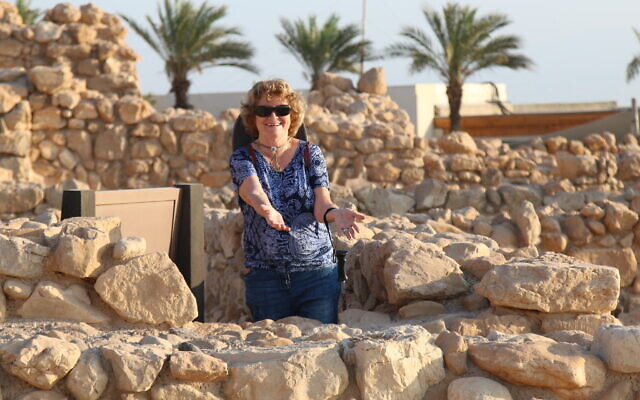 A window in the ancient kitchen at Qumran National Park was used to distribute food to the multitudes of Essenes who came to perform rituals at the site. (Shmuel Bar-Am)

A cemetery in which over 1,100 tombs have been uncovered is located on the other side of a low wall. Vainstub believes that it was intended to protect Essenes undergoing the ceremony: Jewish law portends that cemeteries are impure, but a wall offers protection from spiritual contamination.

Over a period of about 150 years, until Qumran was destroyed by the Romans during the Great Revolt (66-73 CE), members of the sect wrote hundreds of different scrolls. Many of them, like the Damascus Document, included detailed descriptions of the Essenes’ daily life and the ceremonies that took place at the site. About 200 featured transcriptions of biblical books. When complete, the scrolls were wrapped in linen, placed gently inside clay jars, and stored in the cliffside caves. 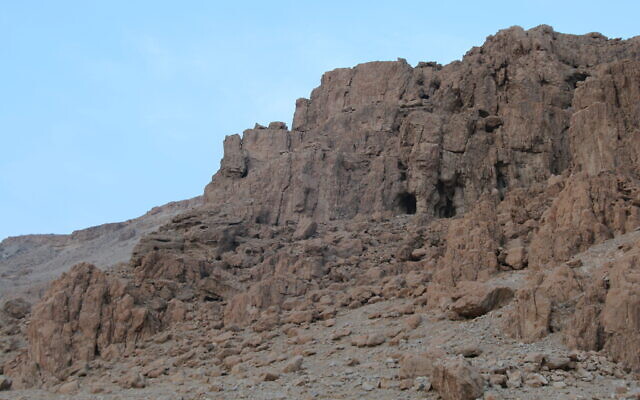 Along the trail at Qumran National Park. (Shmuel Bar-Am)

All of the scrolls discovered to date were unearthed in the caves above the site. Very few were located intact — most of them were only fragments. But reconstruction of these pieces has led to nearly a thousand different manuscripts.

Of all the scrolls, our favorites are copies of the Bible. Until they came to light, the oldest remaining Bible in the world dated back to the ninth century. Yet to the astonishment of the experts (and to anyone who has ever played the party game “telephone”) that ninth-century Bible is almost word for word the same Holy Book as the one written by the Essenes in the Second Temple period. Even the letters were a revelation, for the script is in a familiar Hebrew which Israeli children can well understand. 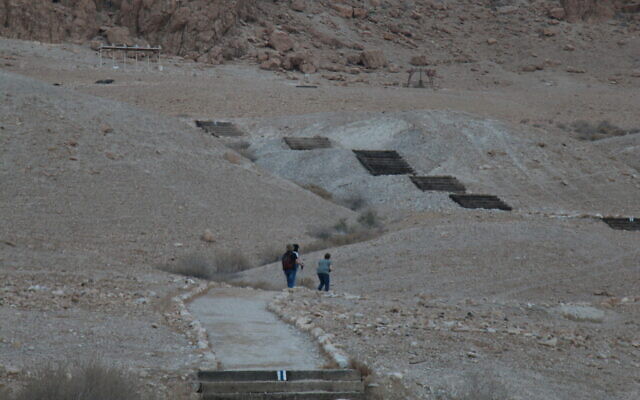 While it is exciting to climb the cliffs and get a close-up view of caves in which some of the scrolls were found, this reporter — who does not suffer from claustrophobia — was terrified that she would fall, and doesn’t plan to take the hike again.

Fortunately, that won’t be necessary: A new path above the national park, designed by conservation and restoration architect Marcos Edelcopp, takes you as near as possible to the caves without having to climb the cliffs. From the path you not only get a really good look at some of the caves but you feel the freedom, and emptiness, of the desert around you.

Called “Scrolls Trail,” or Shvil Hamegilot in Hebrew, it is only 1.6 kilometers (one mile) long, but it is stony and there are quite a few steps here and there. Highly recommended, if you can manage the difficulties caused by the terrain, it takes about half an hour to an hour to complete. 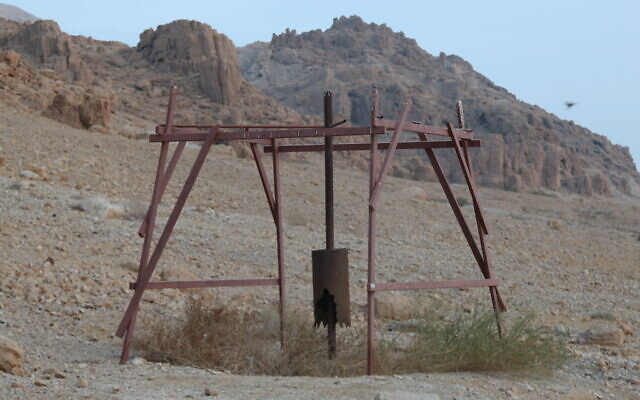 A tool used by the murdered Haganah soldiers to dig water in 1938. (Shmuel Bar-Am)

A side trip leading off from the trail takes you to a rock memorial dedicated to well-known Israeli archeologist and expert on desert sites Hanan Eshel, who died in 2010.

Another memorial consists of a large, rusting metal container totally out of place in the middle of the desert. It marks the spot at which four Haganah soldiers — pre-state Israel’s military body — sent to dig for water in the desert were killed by Palestinian Arabs in 1938.

The Scrolls Trail runs between Qumran National Park and Kibbutz Kalya (or vice versa). It is open 24/7 and there is no fee. To do the full trail, you can leave your car either at a lot next to the kibbutz or at the national park; to make the trip slightly shorter, park next to the kibbutz cemetery and forego the first section of the trail.

All Israeli trails are marked with colored stripes. The trail from one side to the other is marked in green, while the side trip is marked in blue.

Qumram National Park is completely wheelchair accessible. Winter hours are from 8:00 a.m. to 4 p.m. Adult admission is NIS 29 ($9); for adult seniors and children it’s NIS 15 ($5). For more specific information on the trail and the parking lots, contact us at israeltravels@gmail.com.

Aviva Bar-Am is the author of seven English-language guides to Israel.
Shmuel Bar-Am is a licensed tour guide who provides private, customized tours in Israel for individuals, families and small groups.