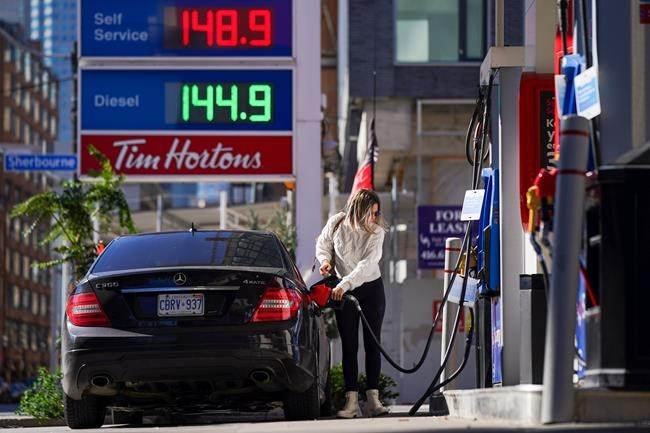 In The News is a roundup of stories from The Canadian Press designed to kickstart your day. Here is what’s on the radar of our editors for the morning of Oct. 20 …

What we are watching in Canada …

The consumer price index in August rose 4.1 per cent compared with the same month one year earlier, marking the largest year-over-year increase since March 2003.

The pace of increases in August reflected the rebound in prices from the lows witnessed one year earlier, a surge in consumer demand and supply-chain bottlenecks that have driven up transport costs being passed on to buyers.

RBC economists Nathan Janzen and Claire Fan say they expect to see an annual inflation rate of 4.2 per cent in September with home and gasoline costs as key drivers.

They also write in a note that supply-chain issues may be more persistent and over time fuel higher, longer-run inflation expectations for households and businesses.

Bank of Canada governor Tiff Macklem has said the central bank would act to rein in inflation if the current bout of price increases look to become more than one-off pressure points.

The bank’s twin surveys of consumer and business expectations released Monday showed both groups expect the pace of price increases to remain elevated over the next year.

Prime Minister Justin Trudeau will continue consulting with opposition leaders about how the House of Commons should resume work and what the priorities should be once it is back in operation.

He is scheduled to have separate phone conversations today with Conservative Leader Erin O’Toole, NDP Leader Jagmeet Singh and the parliamentary leader of the Greens, Elizabeth May.

On Tuesday, he exchanged ideas on the resumption of Parliament with Bloc Quebecois Leader Yves-Francois Blanchet.

First on the agenda is whether the House of Commons should resume the hybrid sittings adopted to get through the COVID-19 pandemic or return to normal in-person operations.

That is likely to be a testy topic with O’Toole in the wake of a decision Tuesday by the multi-party board of internal economy to allow only fully vaccinated individuals to have admittance to the House of Commons precinct.

The Liberals, Bloc Quebecois and NDP all support mandatory vaccinations and have said all their MPs have had two shots of approved vaccines; but O’Toole has refused to say whether all his 118 MPs are fully vaccinated and has opposed making it mandatory.

The board of internal economy’s decision to admit only fully vaccinated individuals into the House of Commons precinct applies to all MPs, their staff, political research office staff, administration employees, journalists, business visitors, contracts and consultants.

The precinct includes not just the Commons chamber but some half dozen parliamentary buildings that house MPs’ offices and Commons committee rooms.

What we are watching in the U.S. …

Still defending his supporters who broke into the Capitol that day, Trump has aggressively tried to block the committee’s work by directing Bannon and others not to answer questions in the probe.

But lawmakers have made clear they will not back down as they gather facts and testimony about the attack involving Trump’s supporters that left dozens of police officers injured, sent lawmakers running for their lives and interrupted the certification of President Joe Biden’s victory.

The committee’s chairman, Rep. Bennie Thompson, D-Miss., said Tuesday that Bannon “stands alone in his complete defiance of our subpoena” and the panel will not take no for an answer.

He said that while Bannon may be “willing to be a martyr to the disgraceful cause of whitewashing what happened on Jan. 6 _ of demonstrating his complete loyalty to the former president,” the contempt vote is a warning to other witnesses.

The Tuesday evening vote sends the contempt resolution to the full House, which is expected to vote on the measure Thursday. House approval would send the matter to the Justice Department, which would then decide whether to pursue criminal charges against Bannon.

What we are watching in the rest of the world …

LONDON _ The world needs to cut by more than half its production of coal, oil and gas in the coming decade to maintain a chance of keeping global warming from reaching dangerous levels, according to a U.N.-backed study released Wednesday.

The report published by the U.N. Environment Program found that while governments have made ambitious pledges to curb greenhouse gas emissions, they are still planning to extract double the amount of fossil fuels in 2030 “than what would be consistent with” the 2015 Paris climate accord’s goal of keeping the global temperature below 1.5 degrees Celsius.

Even the less ambitious goal of capping global warming at 2 degrees Celsius by the end of the century compared to pre-industrial times would be overshot, it said.

Climate experts say the world must stop adding to the total amount of greenhouse gas in the atmosphere by 2050, and that can only be done by drastically reducing the burning of fossil fuels as soon as possible, among other measures.

The report, which was released days before a U.N. climate summit begins Oct. 31 in Glasgow, found most major oil and gas producers _ and even some major coal producers _ are planning on increasing production until 2030 or even beyond.

It also concluded that the group of 20 major industrialized and emerging economies have invested more into new fossil fuel projects than into clean energy since the start of 2020.

The disparity between climate goals and fossil fuel extraction plans _ termed the “production gap” _ will widen until at least 2040, the report found.

Wayne Gretzky of the WHA’s Indianapolis Racers scored his first two pro regular-season goals, 39 seconds apart, in a 4-3 loss to the Edmonton Oilers. Gretzky and two teammates were sold to the Oilers two weeks later.

Quebec songstress Celine Dion is delaying the opening of her new residency in Las Vegas because of an unforeseen health issue, just weeks before the show was set to open.

Concert promoter AEG Presents says Dion is facing “severe and persistent muscle spasms,” which prevented her from joining rehearsals for the planned opening of the Resorts World Theatre show on Nov. 5.

As a result, the promoter says all performances scheduled for Nov. 5 to 20, and Jan. 19 to Feb. 5 have been cancelled. Ticket holders get refunds and have access to a pre-sale for replacement dates, which haven’t been announced.

Dion issued a statement saying she was “heartbroken” by the turn of events, adding that she’s spent the past eight months working alongside her team to produce the show.

The “My Heart Will Go On” singer was the first in a stacked calendar of marquee stars booked to headline the new 5,000-person capacity Resorts World Theatre in the coming weeks.

Carrie Underwood, Katy Perry and Luke Bryan and also slated for the venue.

ST. JOHN’S, N.L. —The government of Newfoundland and Labrador says it will bring in the country’s first tax specifically aimed at sugary drinks.

Finance Minister Siobhan Coady says the tax will hike prices on drinks with added sugars by 20 cents a litre beginning in September 2022. The government expects the tax to bring in roughly $9 million a year, and it will be applied on top of any provincial sales tax.

The provincial government first announced its intention to tax sweet drinks in its 2021-22 budget in May, but the details had not been worked out.

This report by The Canadian Press was first published Oct. 20, 2021