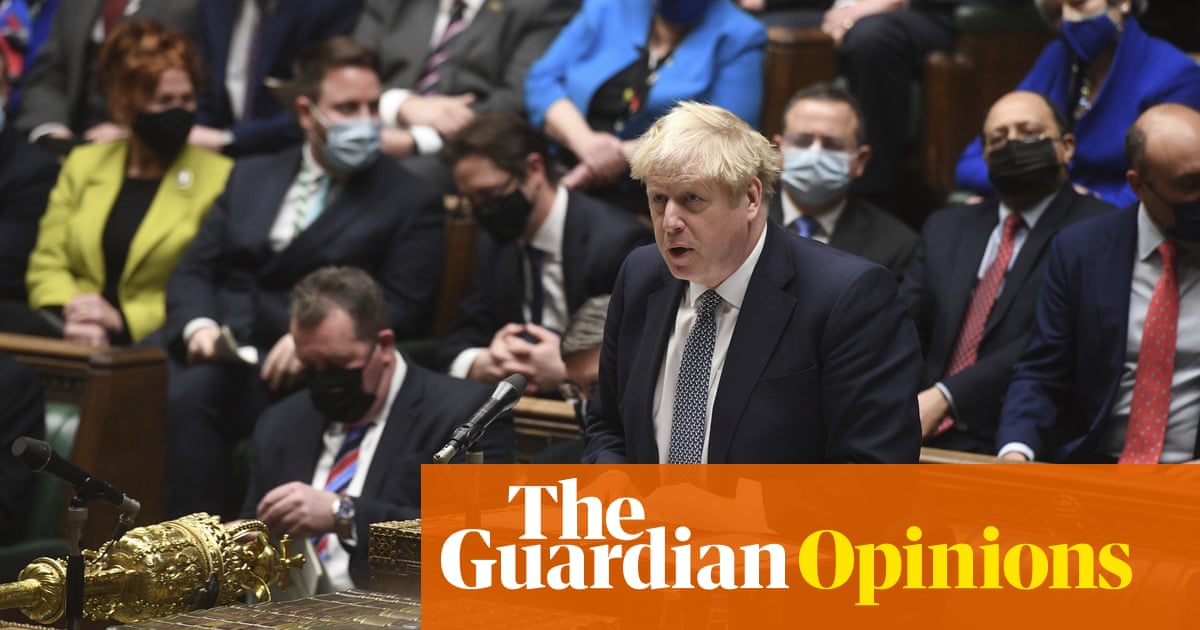 Like a dog that could not be sorrier for chewing the sofa, it was a contrite prime minister who prostrated himself before parliament this week. Dogs are never truly sorry, of course. They have learned that if they whimper, hang their heads and look pathetic when caught, they can defuse their owners’ anger. But they don’t actually feel sorry, because dogs don’t think like that. They just want the shouting to stop.

In Boris Johnson’s case, the ever-so-humble act certainly doesn’t seem to have lasted long. When he toured the tearooms afterwards, taking the temperature of his party, he reportedly horrified some MPs by insisting that he hadn’t actually done anything wrong and was merely taking the rap for someone else: some other prime minister, presumably, who had stood in the middle of a crowd chugging wine on his lawn and now claimed not to have realised that was a party.

Douglas Ross, the Scottish Tory leader, who has publicly called for Johnson’s resignation, confirms the prime minister said something similar to him. What Scottish Tories have seemingly grasped faster than English ones is that an unrepentant prime minister may cost them not just an election, but potentially the union too.

Boris Johnson isn’t going to change now, because if he did he wouldn’t be Boris Johnson. He’s going to keep running his government much as he once ran the Spectator magazine office – which famously boasted half-empty bottles of wine on all the desks and a ping-pong table in the garden, plus the general air of what one visitor memorably called a “knocking shop” – for as long as anyone lets him, although that may not now be very long. He’s not sorry, or not in the meaningful sense of resolving to change. He just wants the shouting to stop. But that’s not going to happen now.

Shortly after new year, I was surprised to hear a former No 10 staff member who is well aware of the prime minister’s flaws privately predicting that Johnson would nonetheless see out 2022. But on reflection, it started to become clear how that might happen. Had it not been for the party revelations, this week’s two big stories would have been Michael Gove unveiling a resolution of sorts to the cladding crisis – a debacle that has hurt the Tories not just among young first-time buyers trapped in flats they can’t sell, but among the furious parents providing their deposits – and London hospitals reporting a fall in Covid cases. Had he not been pseudo-apologising for the party, Johnson would have spent this week boasting that he had called it right on Covid, riding out the Omicron wave without a lockdown. Sue Gray’s investigation into all the other Downing Street parties would still have loomed large on the horizon, of course, but until this week there were hints that Labour’s poll lead might be narrowing. Enough, maybe, to convince restless backbenchers that things weren’t irreparable.

How interesting, then, that his old nemesis, Dominic Cummings, chose this moment to reveal the existence of yet another secret party. Now every Tory MP understands they are staking their majority on a prime minister who seemingly can’t help himself, and whose former closest aide seems determined to finish him off. Where Gray leaves off, the official Covid inquiry will in time pick up, reawakening the same painful memories all over again. But if Tory MPs think that merely replacing their current bespattered leader with someone less obviously compromised solves the problem, they don’t understand the depths of the hole they’re in.

We are so conditioned to the idea of Labour having a mountain to climb in order to win again – still true, since the voters it lost last time aren’t simply going to fall back into its lap – that it’s easy to forget the audacity of what the Tories are attempting. At the next election, they will be asking for an unprecedented fifth consecutive term in power. Of their three most recent leaders, one had to resign after leaving the EU by accident, one was defeated by the task of clearing up the resulting mess, and the last has dragged his party into the gutter. “Give us a chance to finish the job” – the universal slogan of incumbents seeking re-election – starts to sound more like a threat than a promise.

What gets governments re-elected is delivery: the sense that everyday life is getting better – if not for everyone, then at least for those most likely to vote Conservative. Tory MPs got cold feet about their last leader once she became better known for trying and failing to deliver a Brexit deal than for any concrete achievement.

Their current leader was elected primarily on a promise to “get Brexit done”, but has so far rewarded his base with a deal so flawed he immediately started trying to renegotiate it, plus two years of grinding Covid misery and the promise of higher taxes. Even his vague post-Brexit mission to “level up” Britain has been hamstrung by a pandemic pushing things in the opposite direction: in parts of the north-west and north-east hit hardest by the virus, businesses have suffered longer under restrictions than in the south, and children are likely to have missed more school. The next looming crisis, meanwhile, will be NHS waiting lists, which were at a record high even before hospitals started cancelling operations to deal with the Omicron wave, and may well cost more votes at the next election than memories of a garden party.

What the Conservative party really needs now is a workhorse of a leader, with an eye for detail and a record for delivery, who can knuckle down to the boring grind of actually running a country. But party members still drunk on ideology don’t want a Jeremy Hunt figure, some throwback to a forgotten era where competence vaguely mattered, and they’re suspicious of Michael Gove, the last Brexiter standing with the skills to drive a complex agenda through Whitehall. Nor do they want to face the truth about Brexit, which is that voters were promised something that doesn’t really exist, and that lies have a horrible habit of leading to more lies.

The sickness lies not just with the leader but with the party that chose him, and which, having belatedly realised its mistake, seems to think it can just merrily spin the wheel again and force its next choice on the country. If there’s to be another Tory leadership contest, fine. But it must be followed immediately by another general election. The past few years have shown the people of this country to be astonishingly long-suffering. But they will no longer be taken for fools.