Skip to content
HomeNews‘This is a work event!’ More than 100 protesters in Boris masks dance outside Downing St 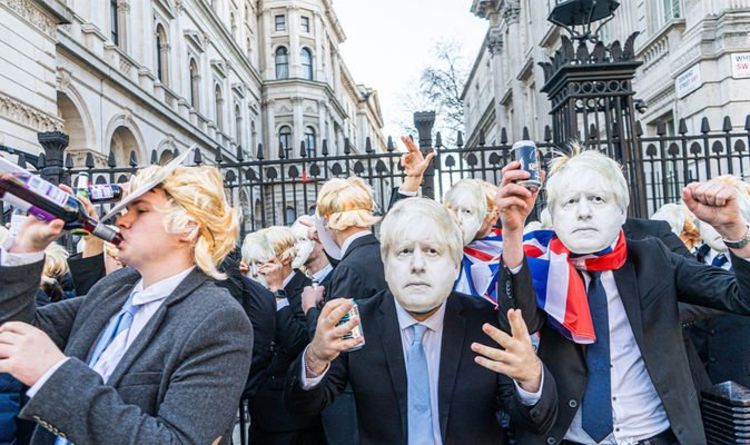 More than 100 demonstrators, many of whom wore suits, made their voices heard on Friday night, chanting “my name is Boris” and “this is a work event”.

The Borises danced, sang and waved around bottles of wine outside No 10 after further allegations of drinks gatherings at Downing Street.

No 10 apologised to Buckingham Palace after it emerged that staff had held two separate leaving drinks in April last year.

Claims of the two parties the night before the socially-distanced funeral of Prince Philip, Duke of Edinburgh emerged on Thursday.

READ MORE: How many were there? Full timeline and dates of every Downing Street party

The Prime Minister’s spokesman said it was “deeply regrettable that this took place at a time of national mourning”.

On the evening of April 16, 2020, around 30 Government staff allegedly drank alcohol into the early hours, with one attendee reportedly carrying a suitcase to the Co-op at The Strand to carry back bottles of wine to Downing Street.

The protesters outside Downing Street are among many members of the public and politicians expressing their frustration towards the Government’s leadership.

The Prime Minister is facing widespread calls for his resignation, including from people within his own party.

The intervention of Scottish Tory leader Douglas Ross, who called for Mr Johnson to go because his “position is no longer tenable”, is likely to be the most striking so far.

A visibly furious Mr Ross broke the ranks as he said on Sky News: “I spoke to the Prime Minister this afternoon and I set out my reasons and I explained to him my position.”

He also told reporters: “I said yesterday if the Prime Minister attended this gathering, party, event in Downing Street on May 20 then he could not continue as Prime Minister.”