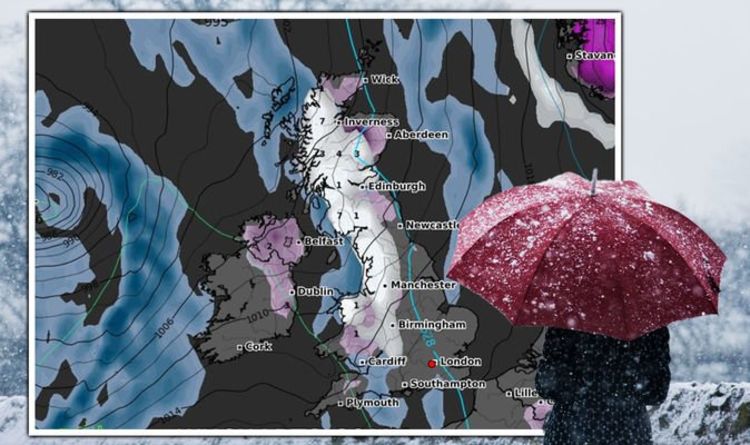 Parts of the country were snowed in during the recent Storm Arwen – after heavy snowfall caused disruption. But now it looks like the snow could return, with Weather Outlook forecaster Brian Gaze warning of the wintry showers.

He said: “Thursday is expected to be cold and there could be wintry showers in the east for a time.

“Nonetheless, most of the UK has a good deal of dry and bright weather.

“Later on it turns wet in Northern Ireland and over high ground sleet or snow is possible.

“During Friday outbreaks of rain, sleet and snow push eastwards.

“Most of the snow is likely to be over high ground in the northern half of the UK and it generally turns back to rain before clearing away.

“All regions should be mostly dry by the afternoon. Rather cold.”

On Thursday, the north of Scotland particularly will feel the first blast of wintry showers with temperating dipping below zero across swathes of the UK.

The Scottish highlands and surrounds are expected to see temperature plunge below -4C on December 2.

Going into next week an “unsettled” system, building in the Atlantic, is set to batter Britain.

Mr Gaze said: “By December 7 it’s an unsettled looking scene with a deep area of low pressure just to the west of Scotland.”

Netweather Senior forecaster Jo Farrow said there will be “blasts of cold Arctic air, milder interludes, frost and blustery winds and still the chance of more snow but it’s mainly over the hills”.

Ms Farrow added: “It will be a cold day on Thursday with sleet and snow showers for the far north of Scotland, a few clipping north Norfolk, northern counties of Northern Ireland, down through the North Channel to the Isle of Man and over Wales, maybe reaching north Devon.

“The winds do ease through the day and again it turns very cold at night, more frost for Britain.”

The Met Office also predicts that with mercury plummeting drastically overnight on Thursday, snow is expected to follow on the hills.

They said: “Turning colder again with wintry showers for the northeast.

“Mostly dry and bright elsewhere, although rain and hill snow will affect most places overnight Thursday into Friday.”