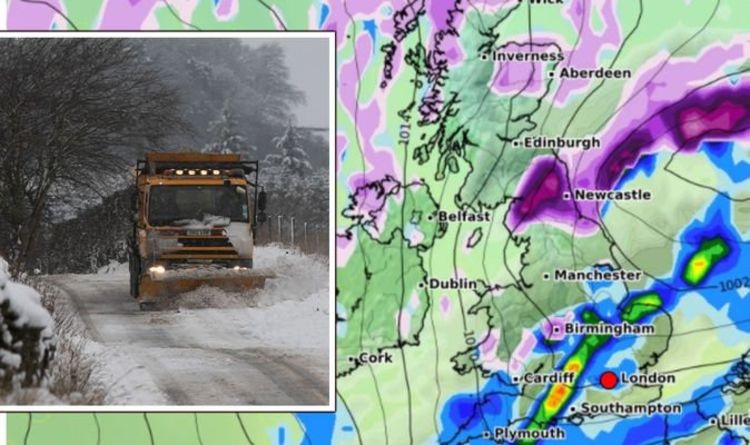 The country can expect snow across many Northern regions, including Manchester, Newcastle, Edinburgh, Aberdeen and Inverness at the end of the month. Weather forecaster WXCharts has predicted up to 13inches (34cm) of snow in Inverness and other parts of Scotland. Regions north of Manchester can expect up to 4inches (10cm) on January 30.

WXCharts has also shown lows of -13C in parts of Scotland, with other northern parts of the UK plummeting to as low as -6C on January 30.

Senior meteorologist at British Weather Services Jim Dale said that the colder weather is likely to begin on January 25, after a much milder, more “tranquil” period over the coming week.

He stressed that “winter is not over”, as the “coldest parts of the year” are yet to come.

Speaking to Express.co.uk, he said: “As we get towards the end of the month – the coldest on average parts of the year – what we’re seeing is the high pressure pulling away south and west, allowing a north-easterly air stream to come in.

“That may well start to bring some snow events towards the latter stages of the month – so that last week of January.

“That period will be increasingly likely to see snowy events across the Highlands and the Grampians and down that eastern coast.

“So how far that actually comes in, and whether or not we get a proper plunge, depends on a little battle going on – does it end up in Denmark, Germany or does the thrust come across and affect the eastern parts of the UK and down to the London area.

He said: “For the next ten days, we’re still in the same block of predominantly high-pressure domination, which will mean fog, mist and ice – but there will be a lot of cloud around.

“Probably more in these next few days than we’ve seen of late.

“I think that will be a little bit of a downer – so mistiness, fogginess, drab.

“If you get the sunshine and the blue sky it’s a real bonus – that’s the good stuff and it’s favoured the south more than the north.

The Met Office’s five-day forecast for the UK warns that fog will become “quite widespread and perhaps dense, especially for central and eastern parts of England, Scotland and Northern Ireland cloudier and less cold.”