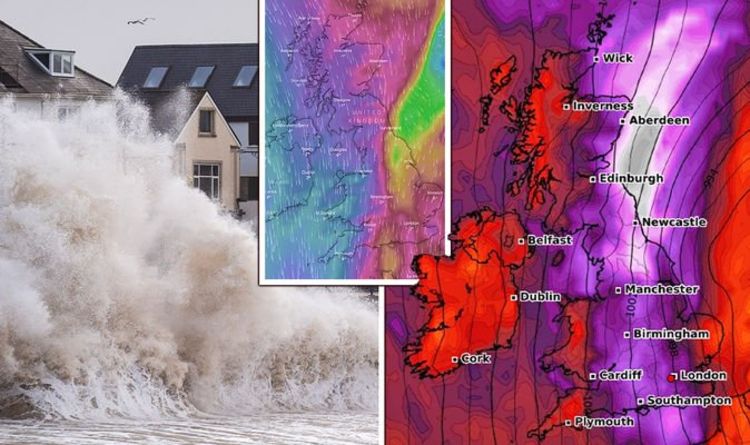 Britons are braced for life-endangering winds, wintry rains and snow spells this week as Storm Arwen hits the country. The storm has been the first of the 2021 winter season to be named and the Met Office has warned it could unleash very strong winds and cold weather across the country on Friday and Saturday. Express.co.uk examines the latest forecasts and maps to reveal the exact time and locations the storm will unleash its most unsettled weather.

The Met Office has issued several wind weather warnings for the coming days in preparation for the arrival of Storm Arwen.

An amber warning for wind has been issued with the forecaster with the weather system becoming the first named of the winter season.

The Met Office said roads and bridges could be forced to close and power cuts are likely.

Mobile phone coverage could also potentially be knocked out by the extreme weather which is predicted to impact much of the UK on Friday and Saturday.

Winds of up to 80mph will be possible in coastal locations, according to the Met Office.

There are two yellow wind warnings is in force across a larger portion of the country, the first is from Friday at 9am until 11.59 pm on Saturday while the second is in place from midnight to 6pm on Saturday.

The warnings advise of the risk from high winds developing on Friday and impacting areas during the weekend – particularly causing travel disruption and damage.

Across the impacted regions, winds gusts in excess of 65mph are likely in some places – with winds between 55mph and 65mph expected widely.

In addition to the strong winds, rain is expected to move southwards across the UK on Friday as these showers could turn increasingly into snow in the north, with a wintry mix of showers which will continue into Saturday.

Snow is possible almost anywhere in the UK, except for southern regions – with accumulations likely to impact hilly places.

The Met Office tweeted: “Are you noticing the change in temperature? Several shots of Arctic air are on the way to the UK later this week as the jet stream dips southwards bringing much #colder and wetter weather. Strong #winds may bring some disruption by the weekend with #snow possible in places.”

In terms of timings, Express.co.uk has broken dow some of the key cities that fall under the weather warnings this week and what time they’ll see rain, sun and snow. To find your city, use the widget below.

BBC Weather warns of a high chance of rain throughout Friday, but windy gusts will also start to hit from 1pm to 3pm, and again from 11pm and into Saturday.

The forecast turns a little sunnier from 8am but more high winds are expected from 10am to 3pm.

Liverpool is in for a blustery few days with the area forecast to be at the heart of the raging storm.

High winds are due to batter the city for much of Friday, starting from 11am and continuing over night before finally starting to ease off from 3pm on Saturday.

Fierce winds will start to pick up in Blackpool tonight from 2am and will continue into Friday, ceasing for an hour at 11am before picking right back up again.

BBC Weather forecasts show the gusty gales will continue throughout the day before finally settling down at about 10am, when sunnier skies should start to peak through the clouds.

Further north in Carlisle, today’s sunshine will make way for rain from midnight with a few breaks in the drizzle tomorrow morning,

But from 7pm on Thursday evening, high winds will whip up a storm into Friday morning.

From 10am, sunny spells should start to break through once again.

While Newcastle will avoid the high winds on Thursday the city could see a sprinkle of snow from 5pm tomorrow after a blustery afternoon.

Into Friday and the winds remain low but the forecast suggests we could see a mix of sun, snow and showers throughout the day.

Heading across the border into Scotland and Glasgow will see the worst of the weather on Friday with drizzly showers forecast from 4pm to 8pm, but sunshine is forecast to make an appearance into Saturday.

In the Highlands, Inverness has a brisk few days ahead with snow forecast from 3pm today with up to a 94 percent chance of rain throughout the rest of the afternoon.

Into Friday and more snow is forecast from 9am to 11pm, with high winds whipping up from 11am to 10pm as well.

Saturday will be marginally better as the rain eases off to be replaced with cloud cover.