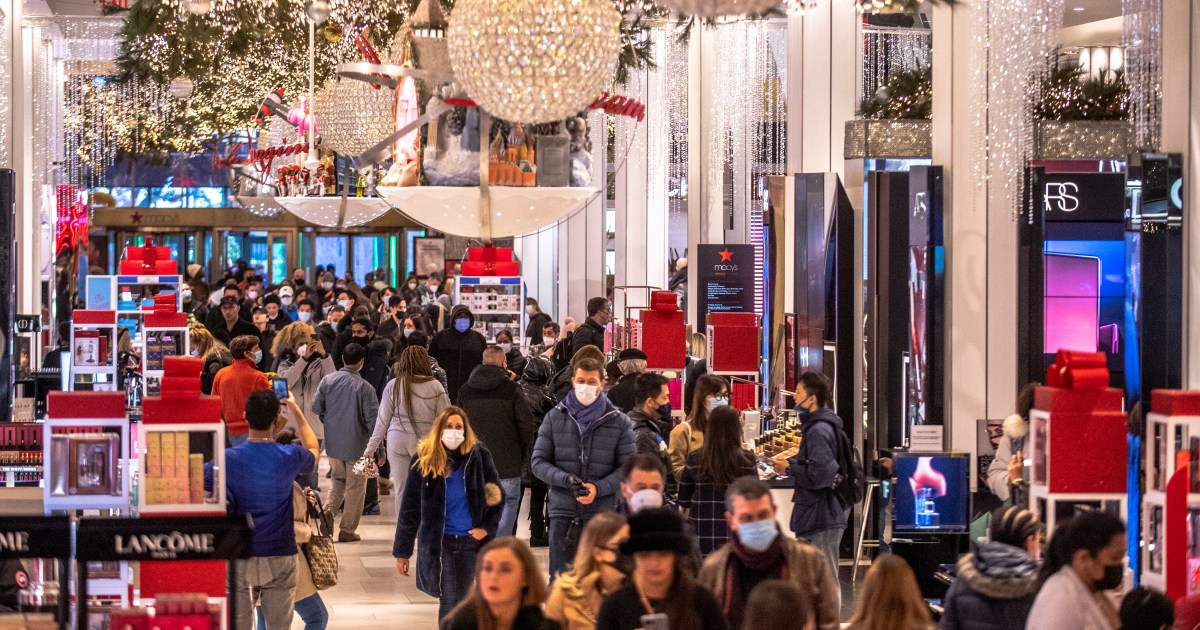 Retail sales fell sharply in December as Omicron, inflation and shortages took a bite out of consumer spending.

A triple whammy of Omicron, shortages and inflation delivered a gut punch to retail sales in the United States last month, as mighty American consumers lost some of their spending mojo.

US retail and food services sales fell 1.9 percent in December, an advanced estimate by the US Commerce Department released on Friday showed. That is the sharpest fall-off in 10 months and follows on from November, when retail sales increased a revised 0.2 percent.

The early snapshot is one of the first data reports to capture the impact of the fast-spreading Omicron variant of the coronavirus on the US economic recovery. But some analysts say ongoing shortages and the rising prices they fuel are the main factors weighing on consumer spending, which drives some two-thirds of US economic growth.

“The 1.9% plunge in retail sales in December, appears to mainly reflect the ongoing impact of higher prices and shortages on consumption, with the Omicron wave having only a modest impact,” said Micheal Pearce, senior US economist at Capital Economics in a note to clients.

December is normally a strong month for retail sales, but the all-important holiday shopping season got off to an early start last year, as consumers got the message that supply chain snarls could wreak havoc on their gift lists.

Indeed, the dreary December data buttoned what was on balance a healthy year that saw total sales for the 12 months of 2021 rise 19.3 percent from 2020.

But headwinds loom. Omicron has triggered a wave of workers calling in sick, as well as flight and event cancellations. The coronavirus, as well as soaring inflation and ongoing shortages of materials and workers, are expected to weigh on growth in the final three months of 2021. And analysts see that declining momentum as a downside risk to growth forecasts for the first three months of this year.

“Consumer spending will remain the cornerstone of economic growth this year but the near-term path will be choppy amid surging Omicron cases,” said Boussour.

A separate government report on Friday showed that US factory output fell unexpectedly in December, due to supply chain issues.

Meanwhile, Omicron and inflation blues have consumers feeling less confident about the health of the US economy, with the latest survey by the University of Michigan showing consumer sentiment fell in January to its second-lowest level in a decade.

“While the Delta and Omicron variants certainly contributed to this downward shift, the decline was also due to an escalating inflation rate,” said Surveys of Consumers chief economist Richard Curtain.

Sentiment fell most sharply among households with total incomes below $100,000. The survey also showed that 33 percent of Americans reported being worse off financially in January than a year earlier – and that is just above the reading of 32 percent seen in the opening weeks of the pandemic in April 2020, when lockdowns had swept the nation.

Prices consumers paid for goods and services in December saw their largest annual increase since 1982. But in a signal that inflation may be poised to ease in the months ahead,  rising producer prices downshifted last month.

Late last year, the US Federal Reserve pivoted its focus away from keeping borrowing costs low to aid the US jobs market recovery and towards keeping a lid on inflation.

At its final meeting of 2021, the Fed says it sees at least three inflation-cooling interest rate hikes in the cards this year, and many analysts are now calling for four.