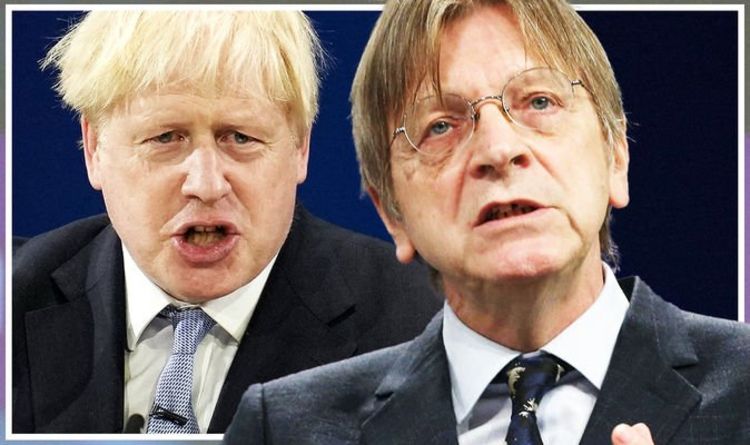 The Belgian MEP sent a stern warning to Boris Johnson over his ability to sign new trade agreements after being allegedly unmasked by Dominic Cummings on his Brexit game. The former chief adviser to the Prime Minister said Mr Johnson never understood what his Withdrawal Agreement with the EU really meant.

Mr Cummings said in a provocative series of tweets that he had always intended to get “the trolley” – his derogatory nickname for the Prime Minister – to “ditch the bits we didn’t like” after beating Labour in the 2019 general election.

He said that when Mr Johnson finally realised the true implications of the deal, he claimed he would never have agreed to it – although Mr Cummings said that was a lie.

During the election campaign, Mr Johnson repeatedly boasted that the “divorce” settlement he negotiated with Brussels – including the Northern Ireland Protocol – was a “great” deal that was “oven-ready”.

Mr Cummings said: “What I’ve said does NOT mean ‘the PM was lying in general election 2019’, he never had a scoobydoo what the deal he signed meant.

“He never understood what leaving Customs Union meant until November 2020.”

He added that when the Prime Minister did finally comprehend, “he was babbling ‘I’d never have signed it if I’d understood it’ (but that WAS a lie)”.

Reacting to the allegations, Mr Verhofstadt blasted: “Playing games and acting tough with the EU is not just self-destructive and pointless.

“Why would anyone else sign new trade agreements with a government in bad faith?

“But the UK’s real enemies are elsewhere wait till they start playing that game against a wholly isolated UK.”

Mr Varadkar said the comments indicated that international leaders should not enter any agreements with the UK Government until they are confident it will keep its promises.

Asked why, therefore, he wanted to renegotiate it now, Lord Frost said: “Because unfortunately, it’s clear that the protocol as it’s being implemented in Northern Ireland is not being implemented with the necessary sensitivity.

“We have to come back to these arrangements again if they don’t enjoy consent across Northern Ireland, that unfortunately is the situation. So that’s why it has to be redone.”

Philip Rycroft, former permanent secretary at the Department for Exiting the European Union from 2017 to 2019, told BBC Radio 4’s World at One programme that the Government “will have known absolutely what it was signing up to when it agreed to the protocol”.

Mr Cummings, who was credited with masterminding the successful Vote Leave campaign in the 2016 referendum, said that, when Mr Johnson entered No 10 in 2019, the country was facing the “worst constitutional crisis in a century” with much of what he called the “deep state” angling for “Bino” (Brexit in name only) or a second referendum.

“So we wriggled through with best option we could and intended to get the trolley to ditch bits we didn’t like after whacking (Labour leader Jeremy) Corbyn. We prioritised,” he said.

He dismissed suggestions that abandoning those elements of the withdrawal agreement would mean breaking international law.