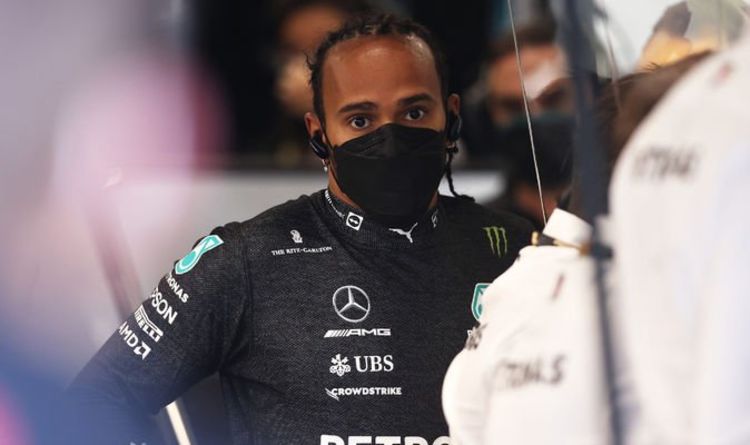 Lewis Hamilton‘s race engineer Pete Bonnington wasted no time in cracking a joke at the Briton’s F1 title rival Max Verstappen‘s expense after Saturday’s Sprint Qualifying session. The Mercedes man started from the back of the grid after being disqualified from Friday’s qualifying session because of a technical rule infringement.

Verstappen had also been called to the stewards after footage emerged of the Dutchman appearing to inspect and touch the rear wing of Hamilton’s W12 – the part which was under scrutiny from officials.

After an incredible charge from last to fifth over 24 laps in Sprint Qualifying, Bonnington was quick to make sure Hamilton avoided getting into hot water with the FIA again this weekend.

“OK Lewis, just make sure you don’t touch any other cars or check them out in any way,” was his message to the seven-time world champion – a clear reference to what Verstappen had been penalised for.

‘Bono’ wasn’t the only one to crack a joke about the situation after the Saturday evening session, as Aston Martin racer Sebastian Vettel also got in on the act.

“Okay, thank you. I am gonna touch Hamilton’s rear wing!” he said, before hastily adding: “I’m joking… I will try the front wing, maybe it’s 25k.”

The German finished 10th in the 100km race, and will start Sunday’s Grand Prix from ninth after Hamilton drops below him due to a five-place grid penalty for an engine change.

The Sprint Qualifying result was still a very good one for Hamilton, though, who charged hard from the moment the lights went out at Interlagos and made up as many places as possible to limit the damage done by his disqualification.

Starting last, he was 16th after the first few corners and it wasn’t long before he was already breathing down the necks of those in the top 10.

The Briton breezed past several other cars and looked as though he was going to finish sixth, which would have been the result of a fine performance.

But it got even better for him, as he saved his best overtake for the final lap when he dove inside the helpless Charles Leclerc – a move which had the Brazilian fans cheering in the stands.

It was a good session for Mercedes in general, as Valtteri Bottas took advantage of a brilliant start on the line to leapfrog Verstappen and take pole position for Sunday’s main event.

The Finn kept the Red Bull at arm’s length throughout and, if he can stay in front after the first few corners in the main race, Mercedes have a vital weapon they can use to potentially slow Verstappen down and allow Hamilton to catch them up.

It was also a good result for Carlos Sainz, who had overtaken Verstappen but was reeled in by the Dutchman – the Ferrari man stayed ahead of Sergio Perez to claim the final Sprint Qualifying point on offer.

The Spaniard was delighted with his performance, telling Sky: “Today, the start was beautiful. We were aggressive, we managed it well.

“Tomorrow will be a great opportunity, starting third. Red Bull will have many chances to overtake me, but there are many laps.”

The Brazilian Grand Prix is scheduled to start at 5pm on Sunday.