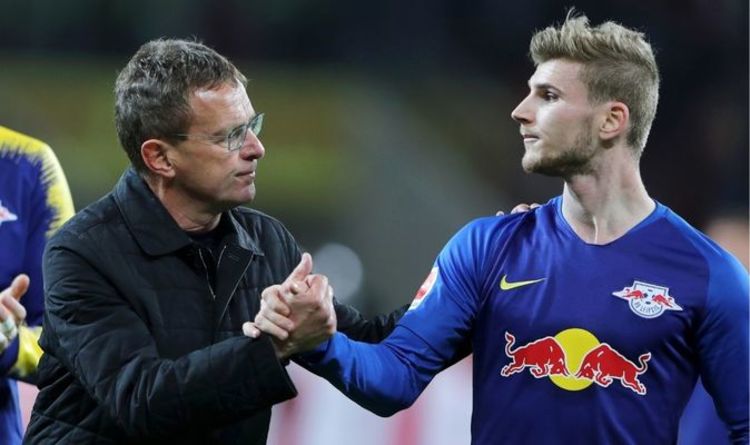 Manchester United interim manager Ralf Rangnick wants to explore the signing of Chelsea flop Timo Werner at the end of the season, according to shock reports in Germany. The 63-year-old was the man who brought the forward to RB Leipzig from Stuttgart back in 2016 and now a possible reunion could be on the cards in Manchester.

Rangnick has put pen to paper with United until the end of the season before he will move upstairs in a consultancy role for two years.

It means he is likely to have a say on the club’s recruitment plans moving forward, which would suggest he will have an influence on future signings.

The German is already understood to be weighing up a £33million swoop for RB Leipzig midfielder Amadou Haidara.

The Mali international is now on United’s radar ahead of the January transfer window as they look to strengthen their pack.

Nonetheless, he finished the campaign with a Champions League medal around his neck following Chelsea’s 1-0 triumph over Manchester City in Porto.

His involvement has since become limited at Chelsea following the arrival of club-record signing Romelu Lukaku.

Chelsea boss Thomas Tuchel said at the start of October that he felt no sympathy towards Werner for his lack of game time, following complaints in the media.

“Why should I speak with Timo or any player about expectations?” he said. “It would be endless. He needs to focus and nobody, I’m pretty sure, promised he plays every single minute no matter what.

“There is no reason to be frustrated but there are a hundred reasons to be happy. Be spot on in training and fight for your place, that’s the situation for everybody.”

Werner is now believed to be considering his options as he targets more minutes in the second half of the season.

He failed to seize his latest opportunity against Manchester United on Sunday at Stamford Bridge, spurning a glorious chance to win the game for the Blues.

And the prospect of feeling appreciated by his former boss Rangnick could now become appealing as he begins to embark on his new chapter with United.

The Red Devils are already stacked with a whole host of attacking options though, meaning Werner’s chances of game time are unlikely to improve even if he did make the move.

Edinson Cavani is out of contract at the end of the season though while Anthony Martial is expected to be sold.