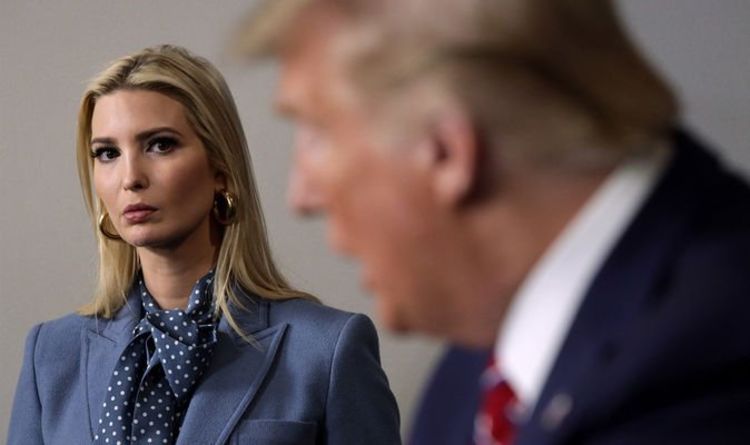 IVANKA TRUMP and Donald Trump Junior last week refused to testify to a fraud inquiry into the family’s business. Donald Trump’s two oldest children were ordered to give evidence as the former President is accused of inflating the value of his assets to banks when seeking loans. New York Attorney General Letitia James opened the civil inquiry into Mr Trump – the former White House chief sued Ms James last month, accusing her of pursuing a politically motivated witch hunt against him. Ivanka has worked closely with her father in the past, including during his four year term as US President.

She was a senior advisor in his administration, and also the director of the Office of Economic Initiatives and Entrepreneurship.

But Marissa Velez, who worked with Ivanka on her fashion label for three years, believes the daughter of the 45th President could be planning a bid for power herself.

In January last year, Ms Velez said: “I don’t think she will try to get back into New York society.

“She’s not just going to walk away from the White House and say ‘Cool, that was a great four years, I learned a lot’.

“Fashion was just another way for Ivanka to get her family into a more powerful position.

“Ultimately, power for her family was all she wanted. Which is why I think she’ll one day run for president.”

There is also speculation surrounding Mr Trump and whether he could try and regain his seat in the White House.

None of the US’s recent one-term presidents have run for another term after being defeated, but Mr Trump is clearly considering it.

In April, he told Fox News’s Sean Hannity that he was “looking at it very seriously, beyond seriously” but that “from a legal standpoint, I don’t want to really talk about it yet, it’s a little too soon”.

Later in the year, he returned to Mr Hannity’s show, adding: “As the campaign finance laws are extremely complicated and unbelievably stupid, I’m actually not allowed to answer that question, can you believe it?

READ MORE: Biden slammed as a failure after ‘chaotic’ Trump

He added: “A couple of months ago, I wasn’t sure. Now … there needs to be something that will keep him out.”

Mark Meadows, Trump’s former chief of staff, appeared to discuss the former president’s future aspirations in an interview in August.

He told The Hill: “We met with several of our Cabinet members tonight … I’m not authorised to speak on behalf of the president, but I can tell you this.

“We wouldn’t be meeting tonight if we weren’t making plans to move forward in a real way, with President Trump at the head of that ticket.”