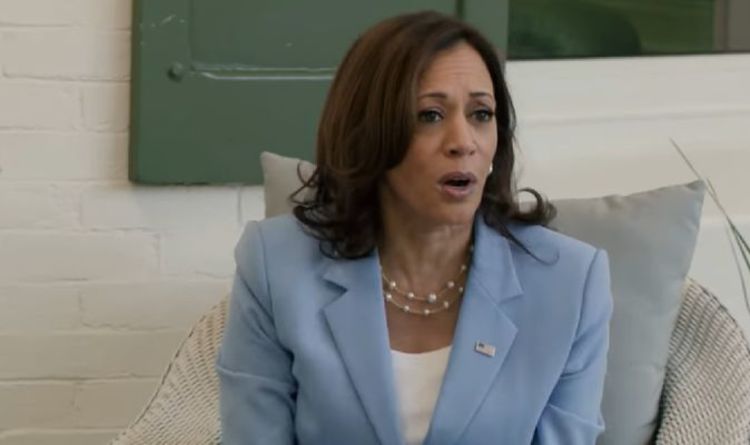 US Vice-President Kamala Harris has seen her 2024 presidential hopes ridiculed by political commentator Garland Nixon on RT with George Galloway. Mr Nixon shut down the US Vice-President for her media appearance in a video with NASA for World Space Week in which Ms Harris hosted a group of children in Washington DC. Mr Nixon described Ms Harris as “extremely uncomfortable in front of the camera” before concluding she could not be a viable Democratic Party candidate at the next US election.

“So far Joe Biden seems to be holding out I don’t know if that is a good or a bad thing.

“But one thing is obvious in watching that as a person who has done a lot of television, not saying I am good or bad at it but I have done a lot, Kamala Harris is extremely uncomfortable in front of the camera.

“She has very very poor political skills and very poor skills in front of the camera.

“She looked like a deer in the headlights,” added the political analyst.

“She started meandering and wandering around with her discussion.

“It turned into rather an embarrassing word salad.

“So I can not see Kamal Harris as a viable presidential candidate.”

“Never let anybody suggest to you that you are what they think you should be, you tell them who you are and who you know you are, and what you intend to be. Got that?”

The Vice President went on to describe at length her passion for space and “exploring the unknown.”

“You’re gonna literally see the craters on the moon with your own eyes!” Harris told the kids.

“With your own eyes! I’m telling you, it is gonna be unbelievable.”