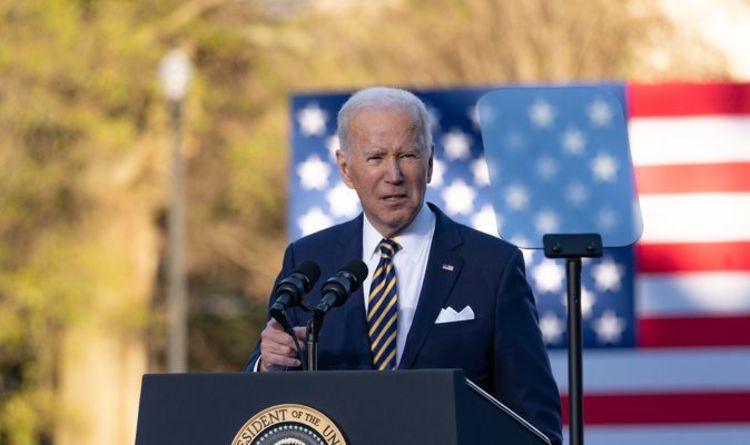 Joe Biden‘s popularity among American voters has sunk to new lows with a new poll showing only one-third approving the job the US President is doing. The latest polling numbers also show that Mr Biden’s personal approval has now fallen below former president Donald Trump‘s lowest ever rating of 35 percent.

The Sky News Australia presenter said: “US President Joe Biden’s popularity has sunk below Donald Trump’s at the same point in their presidency.

“According to a new poll, the President’s approval rating fell to 33 percent this month.

The Quinnipiac poll also lower than the former president’s lowest ever rating of 35 percent.”

She added: “Joe Biden’s tenure has suffered due to the withdrawal of the troops from Afghanistan and concerns around rising inflation.”

It comes amid report that US Democrat Party officials are now desperate to find a new candidate for the 2024 election.

Former White House advisor Ms Heineback has told Sky News Australia: “What I think is going on right now with the Democrat Party and the DMC, they have no one to put forward, but they know the one person who can get press, who can keep people talking about the Democrat party since Joe Biden, you know, hasn’t done anything is Hillary.

“I think they are really scrambling to figure this out and there’s no one to come to the fore.

“Well, we’ve got sleepy Joe and you know, and brainless that are leading the party, they don’t have one win.

“Look at the border situation, Biden has been trying to pass an economic package for a whole term, more than three months, that has not worked.

She continued: “Taxes are high and interest rates are going up, people cannot afford gas or food or beef and we’re looking at a very dilapidated party that is really, I think, on the fence, and they’re trying to buy time to find someone.

“There are a few candidates in the Republican Party nut what would be I don’t know whether to call it hilarious or the next civil war if you had Trump and Hillary because both people feel like they did not really lose the election.”

Earlier this week, President Biden delivered a speech on voting rights legislation in Atlanta, Georgia when he mistakenly made reference to “President Harris.”

Vice-President Kamala Harris has been muted by some as a future potential Democratic candidate for the White House.

President Biden told the crowd: “Last week, President Harris and I stood in the United States Capitol to observe one of those before and after moments in American history.”

Biden was referring to the assault on the US Capitol on January 6, 2020, by supporters of former President Donald Trump.