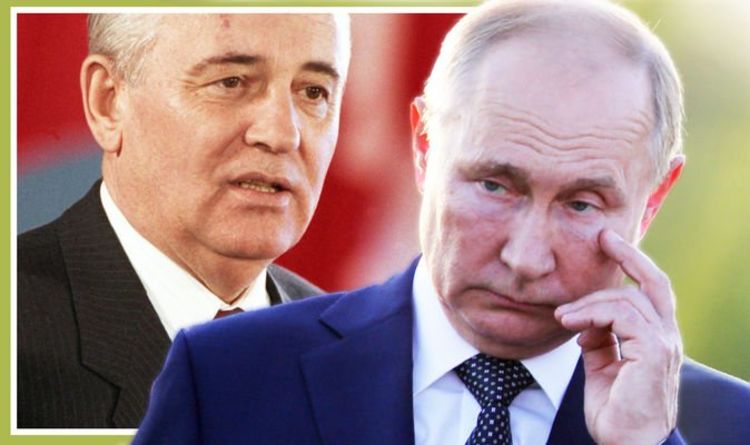 Back in 1990, Lithuania became the first Soviet republic to declare independence from Moscow. However, during a crackdown in January 1991, Soviet troops killed 14 Lithuanian civilians during the storming of its state television headquarters and TV tower and more than 140 people were injured.

Now relatives of the victims have filed a civil lawsuit in Vilnius against the former Soviet president Mr Gorbachev, 90, claiming he failed to stop the military operation.

The six relatives said in a statement: “The lawsuit is aimed to hold Gorbachev, the highest-ranking USSR official, accountable for the January 13 massacre.”

The lawsuit, which seeks undisclosed damages, was filed on behalf of the relatives on the exact 31st anniversary of the killings, they said.

They continued: “We have presented evidence that the then-president was in control of the army but did not act to prevent the planned criminal action and did not stop the international crime while it was being executed.”

According to its spokesperson, the court will now decide on the admissibility of the claim.

Back in 2019, a Lithuanian court found former Soviet defence minister Dmitry Yazov guilty of war crimes and crimes against humanity for his role in the crackdown.

Yazov was sentenced in absentia to 10 years in prison.

He was the highest-ranking person on a list of 67 former military officials and army officers being sentenced after the three-year trial.

The country was a one-party state (prior to 1990) governed by the Communist Party of the Soviet Union, with Moscow as its capital within its largest and most populous republic, the Russian SFSR.

The Soviet Union formally dissolved in December 26, 1991, a day after Mr Gorbachev resigned.

Last week, it was reported Mr Putin was planning a “blitzkrieg” against Ukraine as well as “nuclear blackmail” to recreate the USSR on the EU’s border.

According to papers, reportedly from Ukrainian intelligence, Moscow will attempt to use peace talks with the US as a facade for “large-scale military preparations” around Ukraine’s border.

It warns trying to “pacify” Mr Putin “could lead from the growth of Russian regional aggression to a real world war and is a real threat of western democracy destruction”.

These include “spreading armed conflicts with elements of hybrid wars, intensifying espionage, provocations and sabotage, economic pressure and spreading global corruption” across the West.

Ukraine warned this is “to neutralise western influence and create a trading space” in a bid to return to the Soviet Union.

Since 2014, more than 14,000 people have been killed in the conflict in eastern Ukraine.

In September, Ukrainian President Volodymyr Zelenskiy warned an all-out war with Russia could be a “possibility”.