Skip to content
HomeWorldSeriously? Joe Biden walks off AGAIN after refusing to answer questions on Putin 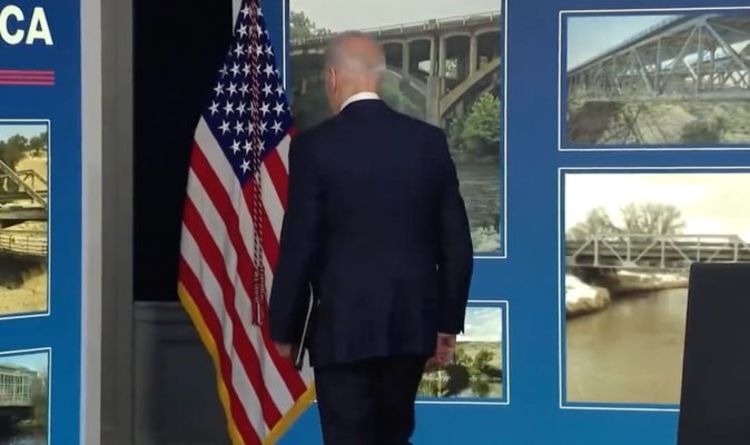 Speaking at a press conference on Friday, President Biden announced that as part of his Build Back Better Plan for America, $27 billion will be thrown into repairing and building new bridges across America to boost the economy. But after making his speech he was quickly pounced on by reporters to give a comment after talks with Russia collapsed with no progress made in tackling the military and strategic ambitions of President Vladimir Putin.

Ending the speech, reporters could be heard shouting “do you have a message for Vladimir Putin” as well as numerous other questions about the failed talks with NATO and the west.

But a stony-faced Biden simply picked up his speech and told the crowd he “appreciated” their time.

He turned on his feet and walked straight out of the room with his security detail as he refused to answer burning questions on his nemesis in Russia.

The incident is the latest in a raft of occasions where the President has refused to answer questions from reporters.

JUST IN ‘You guys are filth!’ Fury as woman arrested in Australia for not showing vaccine status

Like on previous occasions, his aides can be heard telling the press to leave the room immediately, saying “thank you” as they attempt to usher them out.

But the incident did not go unnoticed as observers took to Twitter to vent their anger and frustration at Mr Biden’s repeated refusals to give comments after speeches.

While @eckylad joked: “Vladimir got nothing to worry about when this guy is in power.”

He has also walked off stage on numerous occasions after COVID-19 announcements.

Talks between the US, NATO and Russia ground to a halt on Thursday after Russia described discussions as “unsuccessful”.

The Kremlin added how there is continued disagreement on fundamental issues of NATO’s role in Europe as President Putin urged he will not back down until NATO decrease its presence in Europe.

It comes as the West is attempting to calm the soaring tension as President Putin has massed a whopping 100,000 troops on Ukraine’s border, with many fearing an invasion.