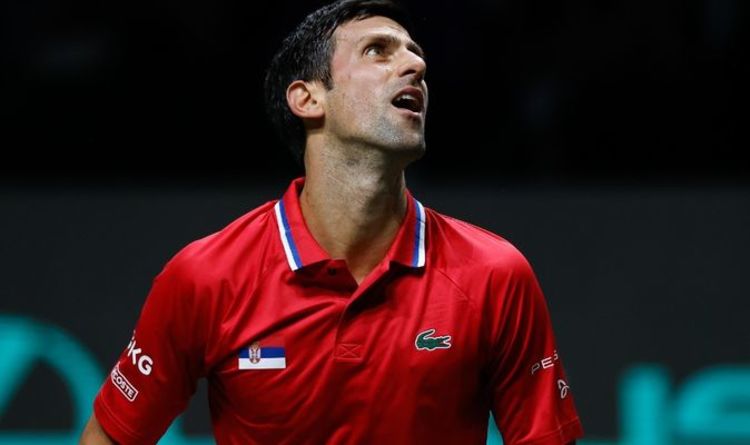 Australia-based Dutch journalist Matt De Groot predicted things will “get very messy” for visa-less Novak Djokovic if he has not been expelled from the Australian Open once the tournament gets underway next Monday. The Nova Radio newsreader warned that the atmosphere will be one of animosity towards the 20-time Grand Slam winner, with Australian tennis fans prepared to give him a hard time from the stands. Mr De Groot aimed a dig at some of Djokovic’s tennis rivals calling for the Serbian to be disqualified, saying that it is because they fear that they will be unable to give him a run for his money “from a tennis point of view”.

But with the clock ticking, Djokovic is facing an increasingly difficult task to be cleared to play after he had his visa cancelled by the country’s immigration minister Alex Hawke for a second time.

Talking from Sydney, Mr De Groot joked with TalkRADIO host Jeremy Kyle, telling him that if the in-limbo tennis hero finds himself on Australian territory by the time “you get off-air” in three hours he will “have breached his deportation act”.

Mr Djokovic and his lawyers will attempt to overturn Mr Hawke’s decision, but Mr De Groot warned that Mr Djokovic is facing the prospect of being deported midway through the tournament.

He said: “He is expected to launch an immediate appeal which therefore means [that] he will probably be here until next week into the Australian open.

JUST IN: Novak Djokovic faces being kicked out of Australian Open as tennis star has visa cancelled

“This means he’ll be dealing with the fact that he may be deported for a third time after he’s made it through one or two rounds in the Australian Open.”

He asked: “So there’s grounds for him to appeal and he’s allowed to continue playing in the Australian Open despite the fact that the immigration ministers have said you’re history here? He’s gonna be treated appallingly by the Australian public, he might as well get on the plane and go home!”

Mr De Groot insisted that the only people who still have Mr Djokovic’s back in Australia are the “Serbian community” and “Serbian president” while the rest hold a grudge against him.

Responding to Mr Kyle’s statement that he might be on the receiving end of “appalling” treatment, Mr De Groot said: “Yes a 100 percent, however, there is a really vocal, and one of the things that’s got a little bit uglier in the last couple of days, the Serbian community.

“The Serbian president had been very aggressively vocal as well right outside his hotel, there have been clashes with the police and this was when it was still in limbo, imagine game one, day one, now he’s taking on a fellow Serbian in the first round so at least that will be a comfortable place but this is gonna get very messy as soon as he moves down the line and this starts to clash with international supporters.

“Other players have come out and said: I don’t think he should be here, probably in their interest from a tennis point of view.”

Mr Djokovic’s name is currently on many tennis fans’ lips and, whatever the appeal’s outcome, that may not change any time soon.

Mr De Grood said: “ This is gonna lead the entire Australian Open story for as long as he is here and then probably if he doesn’t have his appeal upheld, once he is gone as well.”

Mr Hawke explained his decision to cancel Mr Djokovic’s visa after careful consideration as it was “in the public interest” to treat everybody equally, regardless of their status.

He said: “Today I exercised my power under section 133C(3) of the Migration Act to cancel the visa held by Mr Novak Djokovic on health and good order grounds, on the basis that it was in the public interest to do so.

“This decision followed orders by the Federal Circuit and Family Court on 10 January 2022, quashing a prior cancellation decision on procedural fairness grounds.

“In making this decision, I carefully considered information provided to me by the Department of Home Affairs, the Australian Border Force, and Mr Djokovic.

“The Morrison Government is firmly committed to protecting Australia’s borders, particularly in relation to the COVID-19 pandemic.

“I thank the officers of the Department of Home Affairs and the Australian Border Force who work every day to serve Australia’s interests in increasingly challenging operational environments.”